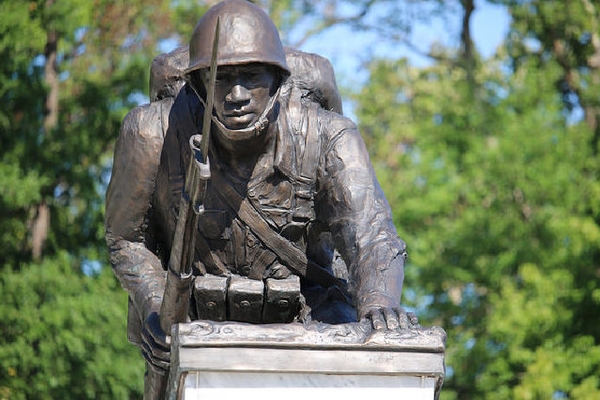 No Controversy Over These Jacksonville Statues

Located on the New River, close to the coastal region of North Carolina, lies the historical, military town of Jacksonville. It’s main claim to fame is the U.S. Marine Corps’ Camp Lejeune and the New River Air Station.

However, the area is rife with history and a story that needs to be told—especially during these times when true heroes are needed.

Between 1942-49, there was another Marine military installation in town, Montford Point. It was separated from Camp Lejeune and created as an experimental training base for African Americans who were needed to fight during World War II. Approximately 20,000 received basic training at Montford Point, segregated from their Caucasian counterparts.

The original plan was to train the troops to fight and, when the war was over, discharge them back to civilian life, regaining the USMC’s all-white status.

The men were not expected to succeed but as years went on, they proved themselves to be just as capable as their white counterparts and were recognized for their value to the country’s elite military institution. By 1948, President Harry S. Truman issued an executive order negating segregation in the U.S. Armed Forces and they were integrated into Camp Lejeune.

On August 24, the Montford Point Marine Association will celebrate the 75th anniversary of the first African-Americans arriving at Montford Point to train. The Congressional Gold Medal will also be awarded, posthumously, to four Montford Pointers.

The Association has names of only about 1,200 of the almost 20,000 men who served and only 300 of these are living. The search is on to find other veterans and their families, who deserve to know they are recipients of the highest award bestowed upon a civilian for his or her service.

If you visit Jacksonville for the memorials, you can also spend time enjoying the outdoor recreational opportunities offered on the New River. The waterway leads out to the Atlantic Ocean, providing several cruise and kayak opportunities. Eco Tours are available through Paddle NC with paddle boarding lessons available for the first-timer and sunset tours for incredible views and wildlife activity.

For a more laid back, glam experience, charter a yacht through Bayonet Cruises where you will enjoy the options of a guest stateroom, food, drink and a sunset wine and cheese cruise. The choices include several hours on the water to an overnight getaway.

For the athletic traveler, runners converge on the city for the USAA Grand Prix Series, a year-long series of running events where participants can run alongside active-duty Marines within the Marine Corps Base Camp Lejeune. Other races are held throughout the year supporting military heroes culminating in the Marine Corp Half Marathon in September.

There is an ample supply of lodging choices around town including all the usual brands and local shopping selections like art galleries, antique and specialty shops, along with boutiques. You won’t have a problem finding authentic North Carolina barbeque in Jacksonville—not to mention fresh seafood on the waterfront.

These non-controversial memorials teach us about true patriots who fought for their country even as they were recipients of racial discrimination in their own neighborhoods. If you know a Montford Point veteran or surviving family member who has not been recognized, contact the National Montford Point Marine Association by emailing [email protected] so they might be rightfully honored and acknowledged.