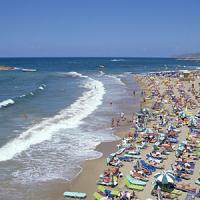 One in four Americans can’t afford a summer vacation

NEW YORK – Nearly 1 in 4 Americans (24%) won’t go on vacation this summer because they can’t afford it, according to a new Bankrate.com report. Not having enough money greatly tops other obstacles like having too many family obligations (12%) and being too busy at work (11%).

The propensity to blame finances for skipping a summer vacation is highest among younger adults, lower earners, the less educated and minorities. While Millennials (ages 18-37) without summer vacation plans are the most likely to point to money as a hurdle, they are also the most inclined to say they’re too busy at work to take time off. Gen Xers (ages 38-53) and Baby Boomers (ages 54-72) are more likely to cite family obligations than work obligations as a hindrance.

“It’s important for Americans who have vacation time to use it, even if it’s for something as low-key as a ‘staycation,’” said Bankrate.com analyst Amanda Dixon. “Otherwise, it’s almost like you’re leaving money on the table.

“For those who feel like they can’t afford to take a vacation, get creative and think outside the box. Don’t let those days go to waste. You earned them!”

Just over half (51%) of Americans plan on going on vacation this summer, with a median estimated cost of $1,000. Many plan to spend more than that, however, including 24% who think they’ll spend in excess of $2,000. Parents with young children, people between the ages of 28-53, higher earners and those with more education are the most likely to take time off in the coming summer months.

This study was conducted for Bankrate by GfK Custom Research North America on its OmniWeb online omnibus. The sample consists of 1,000 completed interviews, weighted to ensure accurate and reliable representation of the total population, 18 years and older. Fieldwork was undertaken May 4-6, 2018. The margin of error for total respondents is +/- 3%.

Previous Economic benefits of tourism in Alberta to be highlighted during Tourism Week
Next 7 Reasons to Visit Super, Natural Vancouver, British Columbia