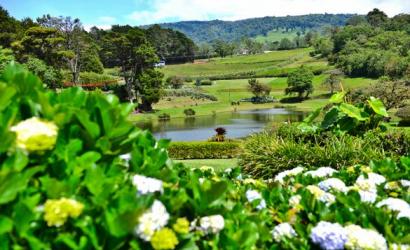 After being closed for 16 months, Costa Rica’s Poás Volcano National Park has just re-opened to the public.

Featuring a new online booking system and new safety measures, the park aims to reclaim its position as one of the country’s most visited natural marvels.

Poás Volcano National Park is one of Costa Rica’s must-see wonders, covering 16,000 acres of nature in the province of Alajuela, just 30 miles north of the capital city of San José.

The park’s main volcano, 8,900-ft-high Poás, is one of the country’s six active volcanoes and it features an incredible crater lake near the summit.

A variety of walking trails, surrounded by cloud forests the sound of hummingbirds, adds to the park’s attractiveness.

The re-opening of Poás Volcano National Park, which had been closed since last year, comes with new security and safety measures for visitors.

These include the positioning of gas sensors with ‘live data’ throughout the park; the purchase of new equipment for visitors to use; and the building of five new shelters, among others.

These measures have made the Poás Volcano the first National Park in Central America to have a risk management system in place – and the eighth in the world.

The park has also established a new online system of ticket sales for a more controlled and organised access.

Visitors will now be arranged in groups of up to 50 people and remain on the volcano’s lookout for a maximum period of 20 minutes.

María Amalia Revelo, Costa Rica minister of tourism, commented: “We are very pleased that visitors can set foot in the beautiful Poás Volcano National Park again, as their experience will be completely different and much more exciting.

“The opening of the park also means that tourism in Poás and surrounding communities will be strengthened, benefitting many local businesses.”