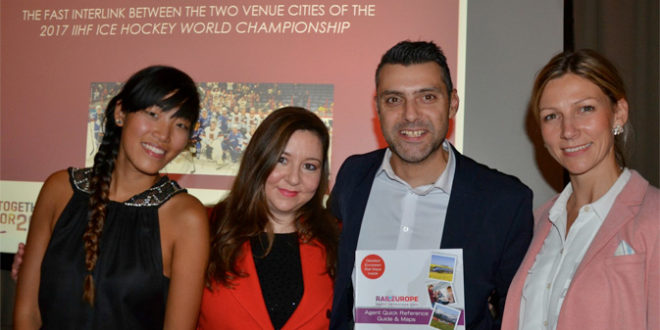 TORONTO — For clients planning a trip to Europe next May, there’s no need to live without Canada’s game. In May 2017 Rail Europe and Thalys will partner with the International Ice Hockey Federation (IIHF) as the official transportation partner during the Ice Hockey World Championship (IHWC), taking place in Paris and Cologne.

The booking process for travel agents wanting to plan tickets or passes for clients attending the IHWC next May has opened via agent.raileurope.ca.

From May 5-21, 2017, the IHWC will be held in both France and Germany, a first for the IIHF and hockey fans, but not for European sports fans, who are used to multiple cities being involved in a world sports event, like the World Cup of Rugby or the FIFA World Cup. The IIHF is forecasting 600,000 to 700,000 fans to attend the tournament, with 16 teams participating including Canada, USA, Finland, Russia, Czech Republic, France, Norway, Italy, Sweden and Germany.

Teams, officials, media and fans will be transported via high-speed red Thalys trains, which operate five times daily between Paris and Cologne, taking three hours and 14 minutes each way from city centre to city centre.

The Thalys networks encompasses four countries – The Netherlands, Belgium, France and Germany, and offers direct service from airports in all those countries, including European hubs that are beneficial to Canadian travellers such as Amsterdam, Brussels, Paris and Frankfurt. Each Thalys train also offers local cuisine, drink, free WiFi and in first class international newspapers and magazines and a quiet area for business travellers, while in second class there is a family area.

“Rail Europe allows travellers to easily get back and forth between the hockey games, but also access any other part of Europe,” said Melanie Albaric, Rail Europe Marketing & Communications Manager, in Toronto last night to talk about the Thalys trains and the upcoming World Championships.  “Travel has become experiential revolution, and we’re focused on making it a memorable holiday.”

Rail Europe has offered the popular Eurail Pass since 1959, as well as Britrail and Swiss Rail passes for travellers wanting to explore the continent by train. Rail Europe also provides special offers for travellers through its website including museum passes, day tours, river cruises and city passes for many European cities.

First class tickets (one way) between Paris and Cologne are $119 while second class tickets are $75 with some additional fees. Agents wanting to make group bookings are asked to contact Rail Europe at 1-800-462-2577.