Breaking News
Home / World Tourism / RewardExpert reveals which U.S. states are home to the grumpiest and the happiest travelers 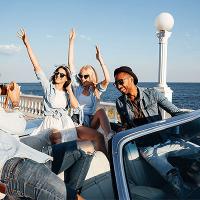 RewardExpert reveals which U.S. states are home to the grumpiest and the happiest travelers

ΝEW YORK, N.Y. – It’s human nature to form opinions concerning the nature and disposition of tourists according to where they call home. RewardExpert – a free service that helps users take full advantage of credit card points and travel rewards – set out to answer the question: which state’s residents are the grumpiest when traveling? RewardExpert took a look at hard data to come up with a definitive and objective ranking. This ranking relies on a data set of 878,561 user reviews of a total of 4,333 hotels that include both the reviewer’s location and a numerical rating.

“We can’t help but make judgements about people based on where they are from,” says RewardExpert CEO and co-founder Roman Shteyn. “It is common belief that Southerners are known for their kindness and hospitality, whereas New Yorkers are perceived as rude and loudmouthed. Yet do any of these conceptions hold true in practice? By analyzing user review data, we set out to achieve an objective assessment of which states are most and least good natured.”

The report found the top three grumpiest states and locations are:

The three states home to the happiest travelers are:

“To determine our list, we ranked states by three key metrics: the number of one- and two-star reviews proportional to population; the number of one- and two-star reviews as a proportion of all reviews from that state in our data set; and the overall average rating for all reviews by users from that state,” says Shteyn. “We then combined these three into composite scores for grumpiness. This allowed us to account for each state’s population share and to adjust the available data to make it more representative of the country’s population distribution.”