Breaking News
Home / Land of the Maple Leaf News / Rick Steves: Come for the mud bath, stay for the beer in Trebon 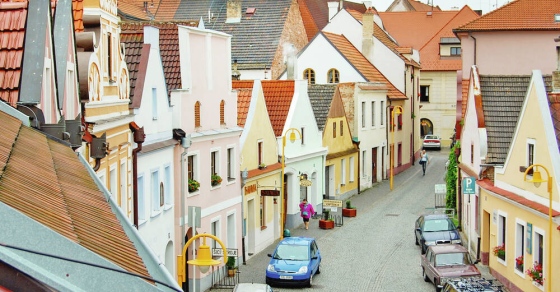 Rick Steves: Come for the mud bath, stay for the beer in Trebon

Until European travel becomes fully open to North Americans, here’s a reminder of the fun that awaits us in Europe.

Submerged in a mucky peat brine, it occurs to me that this must be the strangest bath I have ever taken.

I’m in the well-preserved Czech spa town of Třeboň. I’ve decided to supplement my intense time in touristy Prague by venturing south, deeper into the Czech countryside.

Třeboň’s biosphere of artificial lakes dates back to the 14th century. Over the years, people have transformed what was a flooding marshland into a clever combination of lakes, oak-lined dikes, wild meadows, Baroque villages, peat bogs, and pine woods. Rather than unprofitable wet fields, they wanted ponds that swarmed with fish — and today Třeboň remains the fish-raising capital of the Czech Republic.

People come from near and far to soak in Třeboň’s black, smelly peat sludge, thought to cure aching joints and spines. Envisioning the elegance of the baths I’ve experienced in German spa towns, I decided to give it a whirl.

My masseuse points to my room and mimes undressing. She’s impatient, anxious to get started because the peat muck only flows at the top of the hour. I climb into the stainless-steel tub, she pulls a plug, and I quickly disappear under a rising sea of gurgling sawdust soup. My toes look cute poking out of the hot brown muck.

When we finish, I stand up in the tub and she showers off the sludge, then ushers me into the massage room, where she has me lie face down. It feels like a nurse’s office with a pile of dirty sheets stacked in the corner. She tells me I’m getting a “hand massage.” That sounds redundant at best…kinky at worst. Later I learn that’s literally what massages are called in Czech (ruční masáž).

Finished with my hand massage, I get dressed. Alone and still covered in greasy oil, I head out to meet my local friend, Honza, at dinner. When you come to Třeboň, he says, “You have to try the fish.” We order all the appetizers on the menu — a good trick when trying to sample another culture’s cuisine. There’s “soused” (which must mean “pickled”) herring, fried loach, “stuffed carp sailor fashion,” cod liver, pike caviar, and something Honza translates as “fried carp sperm.” As we eat, I notice that the writing on my beer glass says, “Bohemia Regent anno 1379.” It occurs to me that I’m consuming exactly what people have been eating here for 600 years: fried carp sperm from the nearby reservoir, washed down with the local brew.

Dinner comes with a lively band. They play everything from Bach and Smetana to Czech folk favourites and 1930s anti-fascism blues. The string bass player grooves like a white Satchmo, his long and forceful bow sliding in and out between diners. The bandleader plays a 100-year-old blackwood flute. During a break, I run my finger along its smooth mouthpiece — worn down like an ancient marble relic by countless nights of music-making. The flutist sports a big bushy mustache just like Emperor Franz Josef, who looks down at us from a yellowed poster.

Above the quartet is a high window. The heads of teenagers bob into sight — they’re straining on tiptoes and craning to look in. Each time a song ends, glass mugs of golden beer rattle on rough wood tables as the roaring crowd claps and cheers for more. As the night wears on, there are fewer tourists snapping photos and more locals singing along as the quartet sways together like seaweed in a nostalgic musical tide.

I compliment Honza on the beer. He says, “These days, many Poles and Hungarians are going west to France and Germany to get jobs. But not the Czechs. We can’t find good enough beer anywhere but here. Our love of Czech beer keeps us from going abroad for better jobs.”

Back in my hotel, I climb to my attic room — careful not to bean myself on a thick medieval timber. I lean out my tiny dormer window, the sound of the boisterous bar small in the distance. The new, sturdy roof tiles around me are slick and gleaming with a light rain. The street, wet and shiny, is as clean as a model railroad town. Cars, while not expensive, are new and parked as tidy as can be. The lampposts seem to be intentionally cheery, decorating the line of pastel facades arcing into the distance. They seem to proclaim that Czech society is on track for a bright future.

— This article was adapted from Rick’s new book, For the Love of Europe.