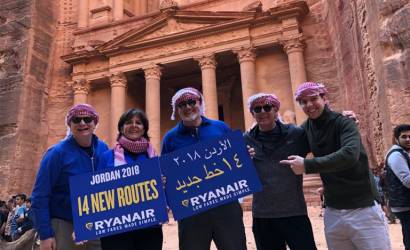 Ryanair has launched its first flights to Jordan, with 14 routes in total to Amman and Aqaba airports now on offer.

The airline said it expected to deliver almost 500,000 customers each year as it expands its operation in the Middle East.

Starting with a route from Paphos, Cyprus, in March, Ryanair’s Amman operation will grow to ten routes from October, as part of its winter 2018 schedule.

Flights to Aqaba will commence in October with four routes and will operate for the winter season.

In Jordan, Ryanair spokesman, David O’Brien, said: “Ryanair is pleased to announce our entry into the Jordanian market from March 2018, initially with one route from Paphos in Cyprus to Amman commencing in March, and growing to ten from October.”

These routes will introduce new business and leisure travellers from eleven European countries to one of the most attractive tourist destinations in the world.

Jordan minister of tourism and antiquities and chairwoman of the Jordan Tourism Board, Lina Mazhar Annab, said: “We are delighted to see Ryanair launch 14 new routes from Europe to Jordan.

“This is a significant development in Jordan’s travel industry that will offer travellers greater choice and value for money.

“Enhancing air connectivity is one of the key areas Jordan is focusing on given its impact on unlocking economic growth through attracting business investment as well as spurring tourism, two factors that are vital to Jordan’s economic prosperity.”

She added: “Ryanair’s decision to fly to Jordan sends a loud and clear message about the diversity and the untapped potential of Jordan’s tourism product.

“It also shows confidence in the tourism industry in Jordan, which has witnessed double-digit growth in the past year.

“The timing of the launch of these new flights is ideal given the increased global interest in Jordan and its recent listing as one of the best destinations to visit in 2018 by numerous world-renowned travel and tourism publications.

“To coincide with these new flights, we will be launching different marketing campaigns in the new source markets targeting specific types of tourists such as religious, adventure and business travellers.”