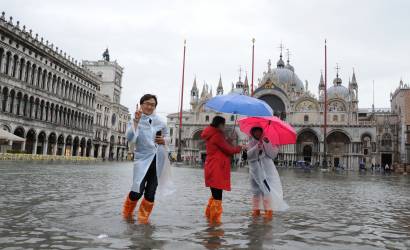 Luigi Brugnaro, mayor of Venice, has said flooding in the city will leave a “permanent mark”.

With severe flooding in leaving much of the Italian tourism capital under water, the mayor said the disaster was a direct result of climate change.

“Now the government must listen,” he added on Twitter.

“These are the effects of climate change; the costs will be high.”

The waters in Venice peaked at 1.87 metres, according to the tide monitoring centre.

St Mark’s Basilica was flooded for the sixth time in 1,200 years, according to church records.

The city of Venice is made up of more than 100 islands inside a lagoon off the north-east coast of Italy.