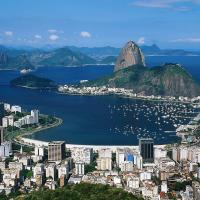 LONDON – A double-digit increase in occupancy during January 2018 was further evidence of hotel performance recovery in Brazil, according to an analysis from STR.

“Brazil endured sizeable performance decreases due to the economic recession as well as the fluctuations and new supply impact that came with hosting the World Cup and the Rio Olympics,” said Patricia Boo, STR’s area director for Central/South America. “As the economic environment and hotel supply situation continue to stabilize, hotels are seeing much more reliable demand growth that is helping occupancy levels.”

While most of the key markets and cities showed negative ADR comparisons during this 12-month time period, Porto Alegre was an outlier with 7.1% growth in ADR to BRL241.40.

Rio de Janeiro’s 6.8% decrease in occupancy and 34.3% drop in ADR heavily influenced the country’s overall performance for the 12-month time period. However, in January 2018 specifically, the market reported a 20.7% jump in occupancy with a less dramatic decline in ADR (-6.2%). Overall, eight of the 10 markets and cities included in STR’s analysis showed a rise in occupancy for January. Seven of those markets and cities posted ADR growth, led once again by Porto Alegre (+11.7% to BRL233.47).

“Because of the mega events of the last several years, we’ve seen a massive supply increase in Brazil’s key cities,” Boo said. “However, with new investors, we’ve seen a shift in development to secondary and tertiary cities. That has meant that hotel performance fluctuations have been seen just about everywhere.”

While included in the list of markets that have seen performance fluctuations in Brazil, Boo noted the strength and stability of Sao Paulo specifically when looking further down the road at the country’s recovery. STR’s latest forecast for Sao Paulo projects growth across the three key performance metrics in 2018 and 2019.

“As the financial hub of Brazil, Sao Paulo tends to react much quicker to economic factors affecting hotel performance,” Boo said. “The performance improvements we have seen since the later months of 2017 should continue for the market.”