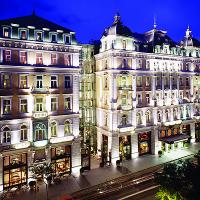 LONDON – Despite a number of market challenges, Europe’s hotel industry posted an all-time high occupancy level for the January to September time period, according to data from STR.

“When you consider the terror attacks across several European markets over the past few years as well as the rise of the peer-to-peer rental industry (e.g. Airbnb), the region’s performance growth confirms the strength and resilience of the hotel sector,” Rossmann said. “We’re seeing markets recover from terror attacks at a much faster pace, and, in some cases, not registering any notable impact, which has been true recently for London, Manchester, Barcelona and Berlin.”

For the September 2017 year-to-date time period, most major European cities recorded growth in revenue per available room (RevPAR). Zurich was an outlier, with a 3.1% decline in the metric due to the strength of the Swiss franc against the European euro. At the other end of the spectrum, Istanbul saw the sharpest increase (+31.8%) due to recovery from an extremely low basis of comparison, when the market was significantly affected by terrorism and security concerns.

In addition to faster recovery from terrorism, Europe’s hotel market has benefitted from strong growth in tourism business across Central and Eastern Europe as well as the Iberian Peninsula. Several key markets recorded double-digit RevPAR increases, including Budapest (+18.4%), Warsaw (+11.3%), Kiev (+24.1%), Lisbon (+20.0%), Madrid (+19.1%) and Barcelona (+15.1%). Although Barcelona’s performance remained quite strong through the August terror attack and September protests, substantial drops were seen after the 1 October Catalan Independence Referendum, as STR reported last week.

Rossmann highlighted that U.K. hotel performance has been notably strong this year, in the wake of Brexit and attacks in London and Manchester. “London has seen demand growth every month since last November, with the pound devaluation boosting both international and domestic tourism,” Rossmann said. “Year-over-year demand increases appear to be waning as the sterling has risen, and incoming supply growth could put pressure on London’s occupancy levels in the near future.”

STR’s data sample in the hotel industry comprises more than 58,000 hotels and 7.8 million hotel rooms around the world.