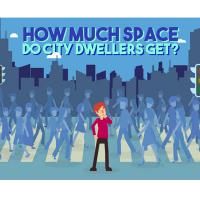 The true cost of personal space in Europe’s major cities

New research from financial experts TotallyMoney explores the average cost and amount of space offered per person in different cities across Europe.

Research revealed Athens as the city with the most confined space, with only 133.31m2 for each person costing £1,287 per square metre in contrast to 585m2 in Ljubljana in Slovenia which costs £2,881.

But which other major cities are least spacious?

Crammed into The Acropolis – Athens Offers The Least Space Per Person

Ljubilant Slovenians and Italians with Space to Roam in

While Athenians and Belgians find themselves the most cramped (with 133.31m2 and 137.34m2 for each person, respectively, both about half the size of a tennis court), other cities were less dense. For a breath of fresh air, you might want to try living in:

London fared poorly in the research – not only is it the fourth densest location included, with only 177.56m2 per person (about the size of 150 bath towels), the price of property was the highest, at £12,930 for a square metre of a house.

To put that into context, it shared the lowest salary-to-property price ratio with Lisbon, Rome, and Paris, despite having the second highest monthly salary in Europe, after Switzerland.

In other words – the only thing London has room for is improvement!

Joe Gardiner, TotallyMoney’s Head of Brand and Communications, said: “In big cities, it can feel like you’re surrounded by people – especially if you commute on public transport. But it’s surprising how much disparity there is across Europe in terms of space – and especially that Athens is the most packed.

In terms of prices, it won’t be a shock as to the most expensive locations – London, Bern, and Paris. But we hope this study highlights how far your money can go in other locations.”