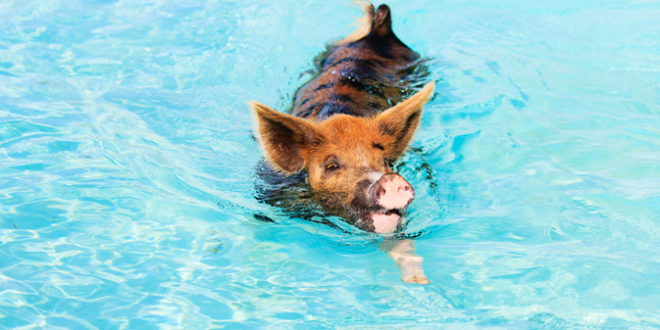 This is what really killed the Bahamas’ famous swimming pigs

BAHAMAS — The mystery of the death of the swimming pigs has finally been solved.

A recent autopsy conducted on some of the pigs that died in Big Major Cay, the uninhabited Bahamas island made famous for its swimming pigs, has found that the beloved animals did not die from alcohol poisoning as initially thought, but rather from digesting sand.

As a result, tourists, who had been blamed for feeding the pigs alcohol, are essentially off the hook. Or are they?

Pigs don’t eat sand for any ol’ reason, so why would they willingly ingest it? The new theory now is that tourists are to blame for leaving scraps of food on the island’s beaches, whether in an effort to feed the pigs or left behind inadvertently. Either way, the pigs made it a habit to forage for food on the beach, consuming too much sand as a result.

Bahamian Minister of Agriculture and Marine Resources, V. Alfred Gray, confirmed that some of the pigs had “a good amount of sand” in their stomachs, and that protocols will soon be put in place to protect the rest of the animals.

Up to half of the 15-pig colony died recently on Big Major Cay, also known as Pig Beach. The pigs, who were left behind on the island by ancient mariners, have gained worldwide fame for their friendly demeanour and dog-paddling capabilities.