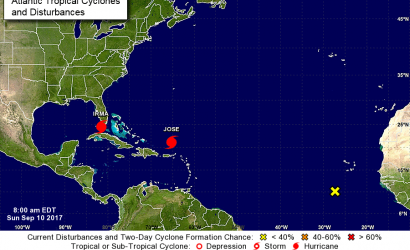 The Caribbean Hotel & Tourism Association has released its latest assessment of the impact of Hurricane Irma, reporting widespread disruption across the region.

Among the worst hit was the island of Barbuda with its approximately 1,800 residents.

The destination was severely impacted by the hurricane which passed directly over the small island, resulting in one fatality.

The prime minister, Gaston Browne said 90 per cent of homes were destroyed.

Barbuda’s hotel infrastructure was also damaged, but with less than 100 hotel rooms the overall effect on tourism as a whole is minimal.

Antigua was not impacted by Hurricane Irma with electricity being resort to the Capital St. John’s and most parts of the island.

The V.C. Bird International Airport opened for all flights on Thursday, September 7th.

With Hurricane Jose threatening, the prime minister issued a mandatory evacuation order for Barbuda on Friday 8th September, the very day the first of three Amerijet cargo planes, with over 120, 000 pounds of hurricane relief for the island arrived on Antigua.

In Anguilla the Caribbean Disaster Emergency Management Agency is reporting the airport runway and most roads leading to the airport have been cleared of debris.

The agency is also reporting that 90 per cent of government buildings and business structures were damaged as well as 90 per cent of the electricity infrastructure.

There is also significant damage to the main water supply.

The British government has deployed three humanitarian aid experts from the UK to assist with needs assessments and coordination.

The British naval ship Royal Fleet Auxiliary Mounts Bay has arrived in the territory, with 40 Royal Marines and army engineers on board.

The ship carries a range of equipment to support humanitarian responses including vehicles, tents and facilities to purify water.

The Bahamas has given the all clear for for Nassau, New Providence, the most populous island, and popular destination within the country.

The all clear for the central and south-eastern Bahamas was issued earlier today.

At this time only Grand Bahama, Bimini, and Andros remain under a hurricane warning as Hurricane Irma moves away from the islands-nation.

The Lynden Pindling International Airport in Nassau sustained no damage from Hurricane Irma and will resumed operations earlier today.

However, all other airports throughout The Bahamas remain closed, but operations will resume as soon as the National Emergency Management Agency gives the “all clear” and the airports have been assessed and cleared for opening.

Cruise ports of entry throughout The Bahamas will also be assessed for clearance to re-open.

The destruction caused by Hurricane Irma in the British Virgin Islands has been devastating, according to a statement from Sharon Flax-Brutus, the director of tourism.

With cell phone towers down and power outages, communication to, from and within, the territory has been difficult, impacting the ability to fully assess the damage.

The destination has lost entire structures and many homes are without roofs, or have been diminished to merely foundations.

The government has begun to coordinate humanitarian relief efforts and an initial clean-up operation.

Hurricane Irma passed along the northern coast of Cuba earlier, where thousands of tourists were evacuated from low-lying cays off the coast.

The Puerto Rico Tourism Company is reporting that major tourism infrastructure and attractions are operational and the island can continue to welcome new visitors.

The PRTC said while there have been power outages, many hotels, as well as essential services such as hospitals, have generators and are operational.

The majority of hotels throughout mainland Puerto Rico are ready to welcome new guests.
Attractions such as parks and beaches are currently being assessed to ensure a committed focus on quick clean up in the coming days.

Flights to and from Luis Muñoz Marin International Airport have resumed.

It has been reported that St. Barth’s was heavily impacted by Hurricane Irma which destroyed government buildings and badly damaged private homes and resorts including the Eden Rock Hotel.

There is flooding throughout the destination.

The French government is sending people and supplies to the country to assist with recovery efforts.

Director of tourism for Dutch St. Maarten, Rolando Brison, is reporting that Sun Wing has evacuated some visitors to Montreal, Canada, while other guests have also been evacuated.

The Princess Juliana International Airport has been receiving flights that are bringing in relief supplies, and evacuating guests.

No passengers, including media, are being allowed in at the moment due to a shortage of staff to man the airport.

However, the airport will be closed, pending the passage of Hurricane Jose, which is now projected to pass away from the Franco-Dutch island.

In Turks & Caicos Islands, governor John Freeman and premier Sharlene Cartwright-Robinson have given the all-clear.

They have said in a joint statement that assessment of the damage is continuing.

The director of tourism, Ramon Andrews, reported that Turks & Caicos Islands experienced flooding, some structural damage, roofs that have been blown off, and trees downed.

However, no loss of life has been reported and all visitors are safe.

Many roads have been flooded and power lines and transformers are down, according to the emergency management agency.

The US Virgin Islands Department of Tourism has advised that full assessment on the impact of Hurricane Irma is under way and while St. Croix is getting back to business, visitors are being encouraged not to visit St. Thomas and St. John.

According to commissioner of tourism Beverly Nicholson-Doty: “The island of St. Croix did not receive the full brunt of the storm, and St. Croix’s Henry E. Rohlsen Airport received its first commercial flight, a JetBlue flight from San Juan, Puerto Rico on Friday.”

The Caribbean Tourism Association and CHTA are actively monitoring the hurricane and will continue to share updates from member countries in the Storm Watch Centre.

Previous Eurostar partners with MagicBreaks for Disney trips
Next US Virgin Islands advises travellers not to visit St. Thomas and St. John