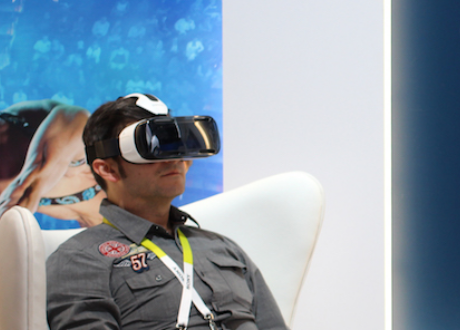 Travel Brands Are Betting on the Future of Mobile Virtual Reality

Is virtual reality the next big thing in consumer entertainment, or a flashy gimmick that will wow tech geeks and then fade away like 3DTVs or Mini-Disc players?

Early adopters in the travel space say that the proliferation of mobile devices in the U.S. is likely to keep virtual reality around for some time to come. There are still many questions remaining, however, whether the technology will truly enable a new, lusher travel discovery experience for the masses.

Research on the scope of the virtual reality market is still scarce, but consulting firm Deloitte projected earlier this year that travel companies will have to grasp with the cost of producing virtual reality content compared to other mediums.

The CEOs of Etihad, Carnival, Routehappy, and More Are Speaking at Skift Globxal Forum 2016. Join Us.

“Any company considering marketing via VR imagery should consider the cost of making this content available to consumers,” states Deloitte’s 2016 Predictions feature on virtual reality. “For example, travel companies wanting to create VR brochures should assess how much filming and playback in VR may cost relative to current marketing approaches. They should also assess the cost associated with acquiring the hardware needed to display these materials.”

This creates a new challenge for travel brands, since technological fragmentation is leading to tough choices about how to spend marketing dollars.

National Geographic, for instance, is investing heavily in creating cutting-edge virtual reality content and forming partnerships with other brands and organizations on expensive projects.

Its most recent major project “Through the Ages” features President Obama checking out Yosemite National Park and was published in conjunction with virtual reality studio Felix & Paul and Oculus, Facebook’s virtual reality division.

“We’re in the 1.0 version of our VR strategy, which is definining National Geographic as a place for premium VR content,” said Matt Zymet, director of digital media content at National Geographic Channel. “As President Obama says in the piece, the idea is to see the beauty of the parks in the hopes of inspiring people to take the goggles off their head and go there themselves. I dont think there’s another brand as well positioned to take advantage of virtual reality than National Geographic. Going out to the far corners of the earth is part of our DNA.”
By partnering with Oculus for the Obama video, National Geographic was able to get exposure primarily on Facebook’s 360 degree video platform.

National Geographic is looking to leverage its global scale and experiment with combining virtual reality content with its legacy magazine packages. Zymet says the brand is sending a team to Borneo to record a virtual reality piece to accompany a magazine story.

The company is also looking to use virtual reality in its travel division, but the high cost of content production is a concern.

“It’’s finding the money to do the experiences at the level we feel we should be doing these experiences, we’re looking at sponsorphips and partnerships,” said Zymet. “Right now, the model is integrated partnerships and branded content. National Geographic has a whole travel business with expeditions and we’re absolutely looking at how we can bring virtual reality to the marketing of our travel products.”

For YouVisit, a six-year-old company specializing in virtual reality travel content, the mobile space represents the clearest path towards the format becoming more widespread as a sales and marketing vehicle.

At first, YouVisit was mainly producing 360 degree video and content that was mainly viewed in a web browser. Now, it’s building non-linear experiences for destinations and travel brand that keep viewers engaged for about ten minutes by allowing users to interactively select what they want to watch.

The average engagement time for its 360 degree videos, in comparison, is about one minute.

“The questions on a lot of brands’ minds is where does this budget come from, how do I measure it, and how do I scale it,” said Meyer. “With the experience available to about 100 percent of the U.S. audience [on their smartphone], potential engagement becomes very high. When you want something much more technologically advanced, you do have Oculus Rift and HTC Vive. It becomes more of an installation art exhibit used at trade show, or at a particular location.”