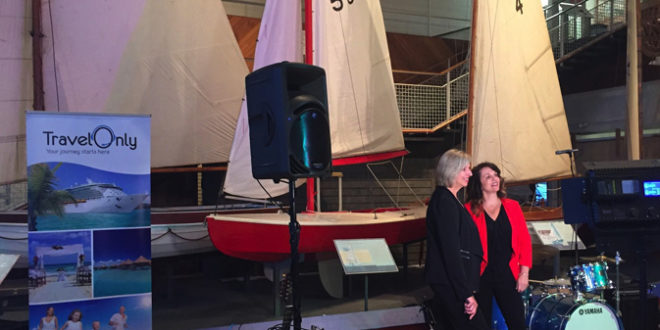 TravelOnly agents turn a Maritime tradition into a potential $5,000 winner

TravelOnly travel agents Kelly Neonakis-Morash and Debbie Cairns hosted their East Coast Kitchen Party this past Sunday night, complete with billowing sails, Maritime music and delicious food. It was all part of a sneak peek into their March 2018 sailing on the Carnival Magic, featuring the talents of well-known Maritime performers who will bring the kitchen party vibe to the sea.

“When TravelOnly agents Kelly Neonakis-Morash and Debbie Cairns had the idea to host an East Coast Kitchen Party at Sea, they just thought they had a clever idea for their next cruise group and never expected to win cash for their efforts!” said Ian Elliott, TravelOnly’s VP Retail Sales & Marketing. “But on a whim the pair entered Carnival’s Ultimate Cruise Night Contest –which invited travel agents to share their most creative cruise night ideas – and are now one step closer to winning the grand prize of $5,000.”

Joining in the festivities this past weekend was Carnival’s Managing Director for Canada and International Sales, Justin French, and Business Development Director Marilisa De Simone. “The quality of this event was, by far, the best cruise night I have ever attended,” said De Simone. “From the amazing venue right on the waterfront, to the East Coast music and the attention to detail like the ‘Red Frog’-labelled beers and ‘Guy’s Burgers’ served at the party, Kelly and Debbie were able to perfectly capture the essence of the Carnival Cruise experience.”

French agreed, offering his congratulations to both Neonakis-Morash and Cairns for the successful event. “Their passion for travel, their customers, as well as the industry came across loud and clear. We appreciate their outstanding support and wish them continued success,” he said.

Final determination of the $5,000 winning cruise event will be announced by Carnival in the coming weeks.

TravelOnly President and CEO Gregory Luciani passed on his congratulations to the TravelOnly team via video feed after the event, commenting on how proud he was of their passion and creativity while acknowledging the “tremendous travel agent support” provided by Carnival Cruise Line.