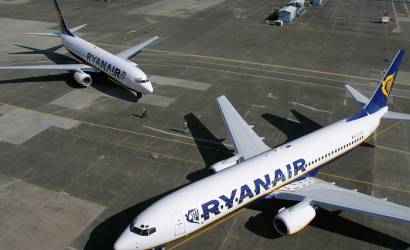 Ryanair has announced that it will fly to Ukraine from October.

In total 32 weekly flights will be offered from the Ukrainian capital.

At the same time, Ryanair will launch five routes from Lviv, including flights to Dusseldorf, Krakow, London Stansted, Memmingen and Warsaw

The city will welcome some 14 weekly flights from the carrier.

Ukraine will become the 36th country on the Ryanair route map.

The news comes after a similar plan was abandoned last year.

Ukraine minister of infrastructure, Volodymyr Omelyan, said: “Ryanair’s entry to Ukraine is the most important event for the national airspace over the past 20 years.

“For Ukrainians, Ryanair’s arrival brings about the opportunity to travel cheaply and safely.

“For the country, it means development of the aviation industry and the network of regional airports.

“For business, it points to a free and competitive market, with rules of fair play.

“For visitors, you can fly to Ukraine at the lowest fares and discover its openness, beauty and business opportunities.

“Today’s signing of the agreement signals the successful completion of negotiations and I extend my congratulations to Ryanair and wish the company every success in Ukraine for many years to come.

“Today, I am very happy along with millions of Ukrainians.”