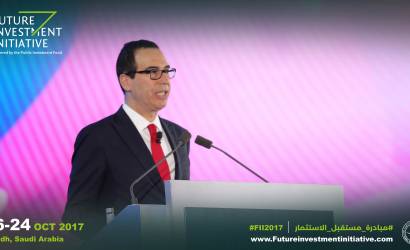 The United States treasury secretary Steven Mnuchin gave his government’s strong and clear support to recent announcements by the Kingdom of Saudi Arabia in an address given at the Future Investment Initiative being held in Riyadh.

Referring to the public statements by crown prince Mohammad bin Salman Al-Saud, chairman of the Public Investment Fund, Mnuchin said that the call for moderation and tolerance will lead Saudi Arabia to a “brighter future” and that NEOM was an impressive new pillar in the country’s development plans.

Beforehand, he reiterated the United States’ strong support to Saudi Arabia’s Vision 2030 reform programme stating that the US stood fully with the kingdom as it lays out a new and successful pathway for its economy.

The treasury secretary made his comments after he attended the official opening of the new International Centre for Targeting Terrorist Financing, which will be co-chaired by the United States and the Kingdom of Saudi Arabia.

Mnuchin referred to this initiative as being one of the critical policies and initiatives of the Trump administration and noted that Saudi Arabia’s leading role in its development will be instrumental in securing its success.

Powered by the Public Investment Fund, the Future Investment Initiative is taking take place from October 24th-26th in Riyadh.

The invitation-only event is being organised in the context of Saudi Arabia’s Vision 2030, a blueprint that is already charting the path for the kingdom to harness its strategic location and strong investment capabilities.