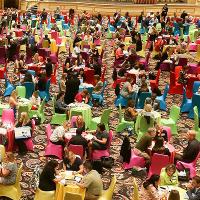 LAS VEGAS – Fuelled by innovative new tools and programs, international luxury travel network Virtuoso is setting records in a variety of areas, heightening interest in agency and advisor affiliation as well as consumer preference for working with Virtuoso advisors. The network highlighted its latest successes during the 30th annual Virtuoso Travel Week in Las Vegas, running this year from August 11 to 17. Setting a record with six percent growth in attendance, 6,071 travel professionals from 100 countries are meeting this week at Bellagio Resort & Casino, ARIA Resort & Casino and Vdara Hotel & Spa. They will hold an enormous number of one-on-one meetings – almost 333,000, equaling more than 1.5 million minutes or nearly three years. Through the meetings, Virtuoso advisors and partners will forge stronger human connections resulting in exceptional experiences for travellers.

In the past year, Virtuoso has increased its ranks by more than 200 member locations, as well as adding agencies in three new countries: Turkey, Monaco and Uruguay.

Virtuoso advisor sales surpass (U.S.) $23.7 billion a year, up 12 percent from the previous year, making the network a powerhouse in luxury travel.

2019 is already looking promising, judging by reported sales for next year. Cruise sales are up 15 percent, On-Site ground operator sales up 14 percent and tour sales up 9 percent.

The strength of the Virtuoso brand is propelling this impressive growth, rapidly attracting new advisors to the network and its agencies. In 2018 so far, Virtuoso has received more than 2,500 advisor inquiries.

To promote the benefits of Virtuoso membership, the network holds both in-person and online Virtuoso Difference events for newcomers. The events inspire a high conversion rate to Virtuoso membership. Other recruitment tools include an online referral program and a new brochure aimed at independent contractors.

New survey data by Phocuswright shows that while 10 percent of agencies are currently affiliated with Virtuoso, the network is the top choice for agencies contemplating a switch.

Professional Development and Advisor Efficiency
Virtuoso’s award-winning and diverse professional development program continues to grow at a record pace. More than 71,000 courses have been completed so far in 2018 – a 59 percent increase year over year. Nearly 1,000 live webinars will be offered this year, which will be attended by 60,000 participants.

The Virtuoso Certified Travel Advisor (VCTA) program offers an intensive week-long immersion for those new to the profession or to Virtuoso. Marking its fifth year, the program has graduated more than 270 advisors with 112 different agencies, transforming them rapidly into million-dollar advisors. Graduates average 74 percent more in production than their peers. Virtuoso will be offering four VCTA classes in 2019.

New Virtuoso research from its U.S. advisors finds the top issue hampering their efficiency is email; managing the volume of emails is overwhelming them. Other elements interfering with efficiency are hotel/loyalty points, shoppers, interruptions, research time and managing information (such as through a CRM system).

To enhance advisor efficiency, Virtuoso offers three itinerary management apps, all graduates of the network’s industry-leading Incubator program: Axus, Travefy and Umapped. Virtuoso is currently conducting research into the financial impact of these tools, with results coming in 2019. The network also offers email management courses, including an in-person session at Virtuoso Travel Week as well as modules in the Virtuoso Travel Academy.

Events
Virtuoso Forum, attended by agency owners and managers, allows participants to maximize their membership benefits through professional development and networking sessions. The US & Canada Forum, the network’s highest rated event with 99 percent of attendees saying it is a good use of their time, will be held in Austin, Texas January 24-26, 2019. Four regional Forums, in Mexico City, Sao Paulo, Beijing and Geneva, will take place throughout the first half of 2019.

Virtuoso Symposium, designed for agency owners and managers, is the network’s global thought-leadership event, including networking opportunities with leading travel executives. It will take place May 5-11, 2019 in Melbourne, Australia.

Virtuoso Chairman’s Event recognises the network’s top-selling and most-engaged members worldwide and is taking place November 4-8, 2018 in Venice. The 2019 event will be in Bangkok November 13-17.

Virtuoso Travel Week on Tour, for frontline advisors, offers one-on-one networking and professional development in 26 cities in 14 countries on five continents in 2019.

Next year’s Virtuoso Travel Week will take place August 10-16 at Bellagio Resort & Casino, ARIA Resort & Casino and Vdara Hotel & Spa. Attending the event, which is responsible for an estimated $420 million (U.S.) in sales, enhances advisors’ profitability. Advisors who have attended Virtuoso Travel Week once in the last three years sell 67 percent more than their peers, and advisors who have attended every event over the last three years sell a significant 179 percent more.

Advisors participating in Virtuoso Communities benefit through training and networking opportunities and marketing tools including themed travel catalogs and advisor profile enhancements in Virtuoso.com. These advantages have resulted in powerful sales boosts:

Virtuoso Community advisors collectively sold 72 percent more in Community partner product than all other advisors this past year 93 percent of advisors say they plan to rejoin at least one community in 2019, and the same percentage say they would recommend that other advisors join.

Advisor Tools, Programs and Technology
Virtuoso.com continues to generate new leads for advisors as well as help them promote their service excellence. The site is on track to generate 200,000 leads for Virtuoso members this year and features 50,000 advisor reviews with an average positive rating of 98 percent.

Virtuoso is helping its agencies and advisors shine online with new custom private-label sites and hosted website solutions. These display Virtuoso content branded with the advisor or agency’s identity and are mobile friendly.

Virtuoso is developing a new tool to help advisors and clients create a long-term bucket list of journeys together. Virtuoso Orchestrator, debuting in 2019, is currently being tested by a group of 22 advisors working with 500 clients.

In the second half of 2018, Virtuoso will roll out a comprehensive marketing platform for members called MyMarketing. The platform centralises marketing communications to provide deeper insights into the success of campaigns and improve efficiencies.