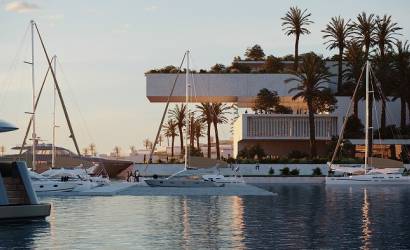 The Red Sea Development Company has awarded a contract for the construction of a residential village for workers at the destination.

After a competitive tender, the contract was awarded in two parts to an ARCCO-Speedhouse joint venture based in the UAE and to Saudi company Al Majal Al Arabi Group.

Each will construct 5,000 units over the next ten months to house the initial 10,000 construction workers working on the site.

A further 25,000 construction workers will be housed in the upcoming Coastal Village, which will be awarded later this year.

“A healthy, happy workforce is key to the delivery of the destination in line with our sustainable development approach; an approach which is guided by a commitment to set new standards at every stage of the development,” said John Pagano, chief executive of the Red Sea Development Company.

“We believe that both ARCCO-Speedhouse and Al Majal Al Arabi share these values.

Development of the Construction Village will, to a large extent, use pre-fabricated and modular construction to reduce delivery time, enhance quality, limit the number of workers on site and minimise the environmental impact of construction.

TRSDC will maintain operational control of the Construction Village once completed, ensuring that the facility is managed in adherence to the highest living standards.

All construction workers at the site will be housed in the Village, whether employed directly by TRSDC or by contractors.

The Construction Village will feature residential buildings positioned to form neighbourhoods around a centralised area that will be equipped with a range of recreational facilities including cricket pitches, volleyball and basketball courts, football pitches, plus a gym and cinema.

IT connectivity will enable people to keep in touch with their families and friends.

The Construction Village will have its own dedicated medical facilities, including an emergency care centre, a laboratory and a dispensing pharmacy.

Construction at the Red Sea Project site has been underway since early 2019, with the Base Camp operational since February.