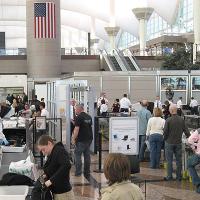 AFGE: “Eliminating passenger screening at airports is a recipe for disaster”

WASHINGTON – The Transportation Security Administration (TSA) is considering a proposal to eliminate passenger security screening at more than 150 small and medium-sized airports across the country – a move the employees’ union says could have grave consequences.

According to reports, TSA claims the move could save $115 million annually, but the plan has little regard for the safety of the flying public. The American Federation of Government Employees (AFGE), which represents more than 43,000 TSA officers nationwide, says saving money should be the least of the agency’s concern.

“Passenger safety, not saving a buck, should be our main priority,” said AFGE TSA Council 100 President Hydrick Thomas. “Eliminating passenger screening functions at smaller airports is a recipe for disaster.”

“TSA was created to protect airline passengers after the horrific attacks on 9/11,” says Thomas. “Removing federally trained screeners from these airports sends a message to the traveling public that we don’t care about putting their lives at risk. Whether we’re protecting 10 passengers or 10,000 passengers, we take our mission to protect the public very seriously.”

AFGE urges TSA to reject any proposal to eliminate screening functions at airports and make aviation safety a budgetary priority.