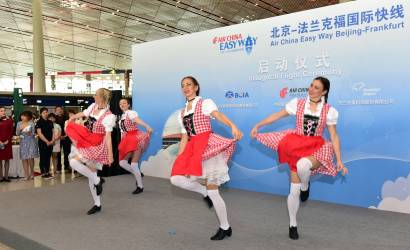 Air China has held a launch ceremony for the inaugural flight on its new route between Beijing and Brisbane.

“The establishment of this new route is part of Air China’s global expansion of its route network and improvement of links between China and Australia.

“The launch of the route will provide a convenient transport link that should spur trade, business cooperation and tourism between Beijing and Queensland.”

Moreover, the recent conclusion of a free trade agreement and the comprehensive strategic partnership between China and Australia point to growing bilateral cooperation and exchanges.

It is expected that the launch of the new Beijing-Brisbane route will help to promote bilateral trade relations, business cooperation and tourism.

It will also provide a convenient travel link for business people, overseas students and tourists travelling between both hemispheres.

Leanne Coddington, chief executive, Tourism & Events Queensland, stated: “This is the first ever air corridor between China’s capital, Beijing, and Brisbane, the capital of Queensland state.

“This represents a major milestone for the state of Queensland. It is expected that the new route will carry almost 170,000 new visitors to Queensland over the next four years.

“The route makes it easier for Chinese tourists to reach Brisbane, which is a gateway to the Gold Coast, the Whitsunday Islands and other well-known travel destinations.

“Chinese visitors are now only half a day away from Queensland’s mild climate, pristine beaches and jaw-dropping Great Barrier Reef.”

In recent years, Air China has been expanding its global route network, and now operates flights out of four major hubs in Beijing, Chengdu, Shanghai, and Shenzhen.