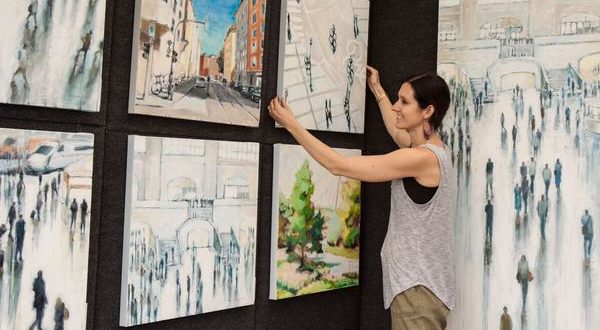 Greenville, South Carolina’s self-deprecating slogan admits that when considering hotspots for fine arts, culture, festivals, haute cuisine, craft spirits, outdoor recreation and history—so many of the reasons we hit the road for—this city between Atlanta and Charlotte on Interstate 85 doesn’t immediately spring to mind. It should.

Greenville’s Artisphere art festival, which celebrated its 15th year this May, shows off the city’s surprises, using its Main Street Disney-manicured downtown as the backdrop.

Almost 1000 applicants vied for the 135 exhibitor spots lining South Main Street for this year’s festival. While weekend rain kept many visitors away, almost 90,000 attendees spent more than $1,000,000 on art during the 2018 festival, according to Visit Greenville.

Greenville, of course, has more to offer than this three-day festival. Everything it does offer emanates from a downtown admired by publications as diverse as Men’s Journal and O, The Oprah Magazine, to Garden and Gun and The New York Times.

Walkable and carefully landscaped, mixing historic buildings with modern architecture, downtown Greenville’s wide, tree-shaded sidewalks lined with restaurants, art galleries and retail boutiques clues in visitors as to why “this Greenville” has not only become a tourist destination, but an increasingly desirable hometown.

“The downtown here will be your ‘a-ha,’ moment,” talk show host Marc Ryan, who moved to Greenville from Houston in January of 2019 after living throughout the South his entire life, said. “Amazing local food, amazing scenery—mountains. There’s an art scene, there’s a music scene and you mix that with Southern culture to create a really warm vibe that people want to visit and people want to be a part of.”

It all comes with a river running through it.

This curvy masterpiece of engineering and architecture serves as Greenville’s Space Needle. It’s Gateway Arch. The iconic structure and its city are now inseparable.

The $13 million bridge shows off the falls below to millions of tourists and residents in countless selfies, Instagram posts, postcards and tourist materials. Like anything worth having, it wasn’t easy.

Fifteen years passed between when the idea for a pedestrian bridge and public gardens to showcase the Reedy River was first brought to the public and Liberty Bridge’s opening. Another bridge spanning the river, that one a utilitarian eyesore serving car traffic, had to be demolished first.

Liberty Bridge was the risk of a century for Greenville, supercharging “that Greenville,” but its foundation is anchored in the massive manufacturing hubs located throughout South Carolina’s Upstate region.

Michelin has invested more than $5 billion in the state since placing its North American headquarters in Greenville in 1975. German technology and services company Bosch followed in 1985 putting down stakes in nearby Anderson.

The coup de grace came in 1994 when BMW opened an assembly plant in Spartanburg. That plant can now pump out 1900 luxury cars a day. Sixty-six thousand people in the Upstate rely on BMW for jobs either directly or through suppliers.

Michelin’s presence has grown to include five plants in the area. Bosch, three.

All have long supply and distribution chains generating tens of thousands of jobs and billions in revenue, payroll and taxes. Those jobs include high paying engineering and executive positions bringing an educated workforce to the area. A workforce demanding culture.

“There’s a ton of culture here. There’s a ton of stuff to do, a ton of fun things to get involved with,” Ryan said. “It really is a diverse population with diverse mindsets. That surprised me. You hear Greenville, South Carolina; it’s not what you think it is.”

Forget what you think, here’s what “that Greenville” is.

Art lovers will find the nation’s largest collection of Andrew Wyeth watercolors at the Greenville County Museum of Art. The museum is also flush with holdings from South Carolina native Jasper Johns, who it hails as “the world’s most acclaimed living artist.” He may be.

Art extends beyond the confines of museums to include 70-plus public sculptures throughout the city, the most recent, Spindle, a gift from Artisphere to the city. Every five years the festival commissions and donates a sculpture to the public.

This year, however, for the first time, that sculpture has been placed outside of downtown with Spindle residing in the Village of West Greenville, a former hub of the area’s textile production the city now bills as South Carolina’s SoHo.

Don’t laugh. With 60 art galleries and a hip, emerging restaurant scene, the Village of West Greenville has become a magnet for creatives.

Murals? They’ve got those too.

Which famous painting from art history does Sunday in the Park a la Reedy River mimic?

That’s Shoeless Joe Jackson in the baseball uniform in the foreground. He’s a Greenville native with his own museum and baseball library in town.

For fine dining in the Palmetto State, Charleston has been the default answer for decades. Greenville is closing fast.

You can’t go wrong with brunch at Husk, which features a constantly changing menu full of locally-sourced ingredients put together by James Beard-nominated Best Chef Southeast 2019, Jon Buck. Order the black pepper biscuits with gravy and be glad you did.

From the bar, the Call to the Post, a cocktail featuring Maker’s Mark whiskey and kumquat, balanced in perfect, delicate harmony, lingers on the tongue and in the mind long after exiting the restaurant. Husk’s selection of American whiskeys is exceptional.

If wine is more your game, a short walk down South Main Street lands you at Soby’s New South Cuisine, Wine Spectator Best of Award of Excellence 2018 winner. The restaurant offers a sommelier to help with your selection.

Favor denim over seersucker? Get down to The Velo Fellow.

A Dale Chihuly glass sculpture can be found steps from the front door.

Take a foodie, cocktail, dessert or breakfast tour with Foothill Foodie Tours. Rally with caffeine at Port City Java, one of Greenville’s more than 100 coffee houses. The pizza slices are big, fresh and delicious at Barley’s. Go for the pizza, stay for the endless selection of craft beer.

After you’ve had enough, steps from the action you’ll find the new Springhill Suites which features one of the most comfortable hotel mattresses found anywhere.

Artisphere is the first of Greenville’s major annual festivals. Euphoria in September and Fall for Greenville in October put the emphasis on food.

The buzz you hear coming from Greenville, “that Greenville,” exists for a reason. Hundreds of them.

“I lived in Houston two and a half years,” Ryan said. “My family never visited me. I’ve lived here for five months. They’re visiting next weekend.”

You should consider doing the same.