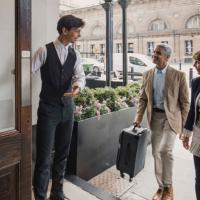 LONDON, UK – A new report by SiteMinder, the global hotel industry’s leading guest acquisition platform, has found that more of France’s accommodation seekers prefer to book their stays directly than with a third party.

Connaître les habitudes et préférences des voyageurs français pour anticiper leurs attentes dans le secteur hotelier, released by SiteMinder, is based on the responses of more than 1,000 French travellers from varied age groups and socioeconomic backgrounds. When asked how they prefer to book their accommodation, 41 percent said they preferred to book directly, followed by 39 percent who nominated an online travel agency as their preferred booking channel. Only 20 percent said they preferred to book via a travel agency or tour operator.

“Hoteliers globally who attract French travellers to their properties should be encouraged by our findings that more prefer to book direct than through a third-party channel. Armed with this information, it is important that those hoteliers capitalise by investing in their direct booking strategy, including, first and foremost, their direct hotel website,” says Antoine Aubrun, Country Manager – France at SiteMinder. “To own the guest relationship and create loyalty from the very beginning of their guests’ journeys, hoteliers cannot underestimate the significance of having an appealing, user-friendly and informative website, as well as a booking engine that is designed to convert both on desktop and on mobile devices.”

SiteMinder’s research also looked at the in-stay preferences and frustrations of French travellers. Above all possible choices, SiteMinder’s research found that what French travellers (39 percent) wanted most was to be able to choose their room. In spite of their increased use around the world, less than 15 percent of respondents expressed interest in an augmented reality experience, and even less (11 percent) said they were interested in artificial intelligence providing them local information and a calendar of activities. Only five percent of participants said they would like to check-in at a hotel without first speaking to a human, suggesting that most French travellers still desire personalised hospitality delivered by people.

When asked to nominate their top frustrations when staying at a hotel, the majority of French travellers reported a bad wifi connection (40 percent) and an access card that didn’t work (28 percent). Other frustrations included delays in receiving customer service or a response to a request (16 percent), long check-out queues (10 percent), and televisions that showed only free-to-air programs (five percent).

Previous Artisphere Art Festival Showcases Greenville, South Carolina as Cultural Destination
Next How to Vacation Like a Celebrity in Barbados