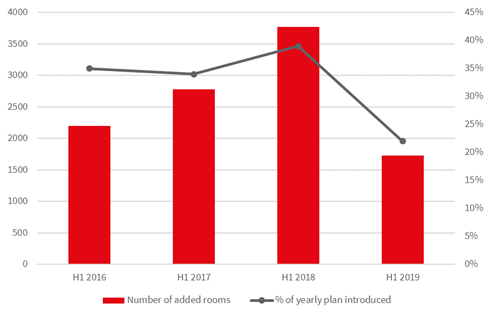 JLL analyzed the activity on hotel markets in Russia, CIS, Ukraine, Georgia and the Baltics in terms of the branded openings in H1 2019 and the operators’ plans for the second half of the year.

“The main reason for this dynamic is a sharp drop in the rate of branded hotels openings in Russia. In first half of the year, only 624 branded rooms appeared in the country; this is almost five times less vs. the record of the pre-football period (first half of 2018), when the market grew by 2,800 keys” comments Tatiana Veller, Head of JLL Hotels & Hospitality Group. “This doesn’t mean that hotel brands are no longer interested in the Russian market, but rather signals the temporary decline in the investors’ appetite for the period when the market is digesting the additional inventory that was built in preparation for the World Cup.”

Plans of brands for the year were very slightly adjusted compared to the announced in January, decreasing by 42 rooms: the total new expected room stock will be 7,900 rooms in the analyzed region, with just below 4,000 rooms in Russia. At the same time, if the overall numbers will be close to last year, when the market increased by 8,000 keys, in Russia this is a drop by almost one-third (compared to 5,700 rooms last year), if all announced projects are implemented.

Despite the fall of numbers in Russia, Moscow still holds the leading position among cities in terms of the volume of the new room stock: 860 announced in the Russian capital for the year, of which 223 opened in H1. The capital of Georgia, Tbilisi is on the 2nd place, still attractive for international brands (expecting 601 new rooms by the end of 2019, still nothing introduced). Krasnodar is on the 3rd place with 588 planned rooms.

The top-3 most popular cities among branded players in Russia in 2019 are Moscow, Krasnodar and Sochi. It is noteworthy that new branded hotels are not planned in St. Petersburg for this year. 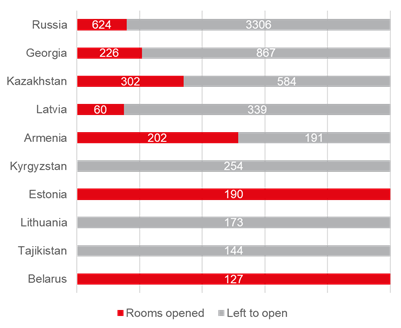 Marriott International (2,600 rooms), Wyndham Hotels & Resorts (1,200 rooms) and InterContinental Hotels Group (IHG, less than 1,000 rooms) are the leading brands in terms of new rooms planned in the region. In the Russian market, the 1st position is also held by Marriott (1,600 rooms), on the 2nd place – Azimut Hotels (820) which strategically develops exclusively in the Russian regional cities, on the 3rd – IHG with 645 rooms.

The most active operator in terms of percentage of rooms introduced by the mid-point of the year is Accor (68% of the announced, or 507 rooms), followed by IHG (38%, 374 rooms). Hilton Hotels & Resorts closes the top-3, having already introduced 207 rooms (22% of the announced). JLL separately notes Radisson Hotel Group, which has already fulfilled its hotel openings plan for 2019, welcomed a Radisson Collection Hotel in the Georgian countryside estate and vineyard Tsinandali (141 rooms) and a Radisson Riga Old Town in Latvia (60 rooms).

“The geographic scope covered by international brands is expanding. We are seeing destinations that have been absent from our radars for a long time such as Moldova, Kyrgyzstan and Tajikistan. Development activity has also returned to Kazakhstan: if all planned 886 rooms open, it will be the record for four years, including the period of active preparation for Expo 2017 in Astana (Nur-Sultan nowadays),” notes Tatiana Veller. “All Baltic countries are expecting new hotels this year; especially Latvia is very active with 400 rooms planned. Two ski resorts outside Russia will get their first branded hotels: Ramada was announced in Shymkent (Kazakhstan) and Best Western in Gudauri (Georgia).”

Kislovodsk, the Russian Baden-Baden, is also expecting its first branded hotel this year – a Ramada. It is also worth highlighting Blagoveshchensk, which is actively developing as a logistical Russian-Chinese hub: the first branded hotel in the city, Mercure from Accor with 90 rooms, is announced for this year.

“Diversification of the branded supply in the market continues. Among the new concepts expected in the region are a rebranding of Chekhov Moscow Hotel into Curio Collection by Hilton (happened in the first half of the year), two planned AC by Marriott in Moscow and Riga, and a Wyndham Grand in Tbilisi”, says Tatiana Veller. “The main trends of the hotel market today are the slowdown in openings in Russia after the preparations for the FIFA 2018, which was expected; the increase in brand activity in the other countries of the region; and lastly, the domination of midscale hotels for mass tourism or local business demand in operator’s plans for this year.”