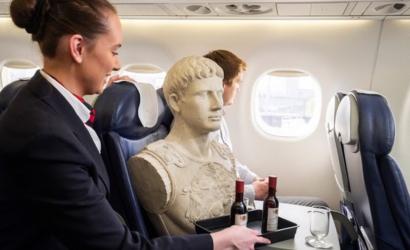 British Airways has launched new flights from London City Airport to the capital of Italy, Rome.

The year-round service is the fourth Italian city to be served by British Airways direct from the Docklands and will operate every day except Saturday.

A special bust of one of Rome’s most famous forefathers, Julius Caesar, was drafted in to greet customers on the first flight.

The bust was welcomed on board the Embraer 190 jet by British Airways’ in-flight business manager and fellow Italian Marco Tagliaferri, one of 15 Italian cabin crew and flight crew who work on board flights to and from London City.

British Airways airport manager at London City, Andrea Sperini, is also Italian although he was born in Venice.

He said: “I’m very proud to see the Italian capital becoming part of our network. It is one of the oldest cities in Europe and a treasury of art, history, traditions, politics and local food – almost anyone can find something to explore and enjoy. “

British Airways is investing £4.5 billion pounds for its customers over the next five years.

As part of that investment the airline recently unveiled a brand-new lounge at Rome’s Fiumicino Airport.

It features the very best of British and European design delivering a luxurious and contemporary look and feel.

Luke Hayhoe, British Airways general manager commercial and customer, said: “We are delighted to add another capital city to our schedule taking the number of routes we fly from London City to Europe up to 34.

“Rome is a destination that will be welcomed by both our leisure and business customers and alongside Florence, Milan and Venice will be our fourth route to Italy.”