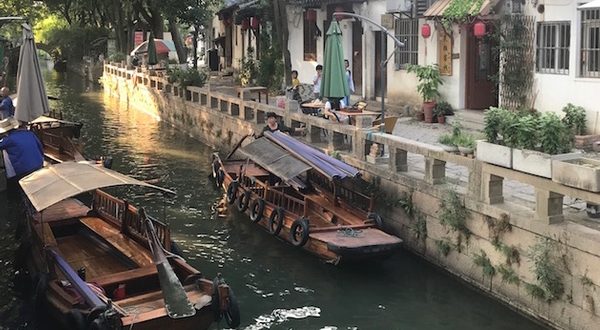 China Beyond the Great Wall

The sprawling, modern cities with millions of people; the masses of futuristic skyscrapers and the construction taking place in every direction were not what I expected or what I had daydreamed about.

I had anticipated these things in Shanghai, a destination famous for being the largest city in the world and one that appears to be on a particularly determined march toward modernization.

But I never imagined this bustling scene of growth, industriousness and urban sprawl would be repeated again and again with stunning similarity in countless secondary cities throughout China, particularly in far lesser-known regions.

The China I had (perhaps naïvely) imagined was an ancient land dominated by marvels like the Great Wall, the Terracotta Army and Beijing’s Forbidden City. Beyond these iconic tourist stops, however—which maintain such a dominant place in the American consciousness—China is a far more complex and unexpected destination.

Nowhere is this more evident than in the coastal Chinese Province of Jiangsu.

Just north of Shanghai, Jiangsu is the third smallest of all the provinces in the country, but at the same time, it’s the most densely populated of all 23. It’s a region that at first blush presents a very modern face of China.

One of the leading provinces when it comes to manufacturing electronics and apparel, Jiangsu is home to several enormous cities inhabited by millions of people—the likes of Wuxi, Nanjing, and Yangzhou, which have 6.3 million, 10.2 million and 4.4 million residents respectively.

During my recent visit to the region, I marveled at the fact that many of Jiangsu’s massive cities I had never heard of before visiting China. Yet they have a larger population than iconic destinations like New York City with its 8.5 million residents or Los Angeles, which has a paltry 3.9 million people.

Despite the province’s substantial population, its major cities and its sheer tangible energy, Jiangsu is struggling to emerge from the shadow of Beijing, which is the location of many of China’s most famous attractions. I learned of Jiangsu’s competition during a lengthy discussion with Chinese government officials and academics during my visit (The Jiangsu government hosted the trip for myself and a handful of other travel media.)

“We have to highlight for travelers the culture and the lifestyle of this region,” said Ye Lingbo, the travel promotion division chief for the Jiangsu Provincial Tourism Administration. “And we have to show them how this region played a big role in Chinese history.”

During seven days in the province, I got a small glimpse of what Lingbo was talking about.

Our journey began in south Jiangsu, in the city of Suzhou, a place renowned for its elaborate and ancient gardens. Two of the most famous are the Humble Administrator’s Garden, which features a network of pools linked by pagodas and also the Master of the Nets Garden, one of the finest gardens in all of China and a UNESCO World Heritage Site.

When it was first built in 1140, the Master of the Nets Garden—a compound that includes numerous residential pavilions, meandering walkways and a small body of water—was home to an extremely wealthy family. Touring the site showcased in vivid and fascinating detail how people lived nearly 1,000 years ago and provided an intriguing look at the China’s complex culture, history and a style of architecture in the country that is disappearing.

In Wuxi, in the northwest part of the province, we spent an afternoon exploring the towering Grand Buddha at Ling Shan. One of the largest such buddhas in the country and the world, it attracts throngs of visitors every day.

Yet, few western tourists could be seen among the crowd.

Perched grandly on a mountain outside the city, the Buddha is 288 feet high and weighs more than 700 tons. A visit to the site has a Las Vegas-meets-Disney-meets-Scientology feel. Dancing water fountain shows at the base of the buddha take place throughout the day in conjunction with almost hypnotic and mysterious music.

Thousands stand in awe and watch the fountain display, filming it on iPhones and cameras. After the show, visitors trek up the mountain to touch the foot of the Buddha for good luck.

Once again, what was most puzzling about the whole scene? I had never heard of this towering Buddha.

Granted, it was only built in 1996, but I found myself wondering if this was something American tourists might like to see? Or if this site was built mostly as a religious venue for locals?

My thoughts about Ling Shan were reinforced when local visitors were so shocked to see westerners in the crowd, they asked to take pictures with us.

Another highlight in Jiangsu province is taking a tram ride up a mountain in Nanshan Bamboo Forest Park. A stunning and lush preserve in Liyang, Nanshan is by some accounts the biggest bamboo forest in China. For many domestic tourists, it’s their favorite natural spot in the country.

Amid a picturesque sea of bamboo trees, visitors can hike, take train rides, observe pandas and make wishes at the panoramic mountaintop where the tram drops visitors.

The final days of my Jiangsu tour were spent in Nanjing, where the Olympics were famously held in 2014.

Just outside the sprawling, traffic-filled, industrial metropolis, the Chinese are busy pouring millions of dollars into another larger than life Buddhist site, this one called Niushou Mountain Scenic Spot.

The site, like the giant Buddha in Ling Shan, is somewhat puzzling at first blush. Newly constructed and state-owned, the awe-inspiring Niushou Mountain is designed to showcase Buddhist heritage and history in a country whose government frowns upon promoting any religion.

The complex includes Usnisa Palace, Usnisa Pagoda and Usnisa Temple, which collectively make up three of the primary attractions at the expansive mountain park.

The massive Usnisa Palace—with its roof made of two overlapping domes; one large, one small—is stunning. The building covers 136,000 square meters and has nine floors—six underground and three above ground. The larger of the two domes on the roof is about 393 feet long and symbolizes the Buddha’s robe. The base of the small dome is meant to symbolize Buddha’s lotus seat.

The palace took about two years to build, and is yet incomplete. Beyond the sheer size of the structure, its elaborate design with ornate sections of gold and vibrant colors, stop visitors in their tracks.

Perhaps most striking, however, are the swarms of people the palace attracts, many of whom make the pilgrimage in hopes that the visit will bring them good luck and good fortune.

“This is the biggest scenic spot in the province,” Winston Wang, our guide, said. “People come here to pray or if they need help from Buddha. It’s a good place for spiritual release. And it is more special because it is new and magnificent.”

A penchant for the new and magnificent seemed to be a theme throughout the province. The few I’ve mentioned here were just the highlights.

Each of the vast cities and massive tourist attractions we visited in Jiangsu made me distinctly aware—like no other destination I’ve ever been to before—that I’m just one person in a sea of humanity.

After observing all of this, one of my fellow American travelers commented that China will very likely overtake the U.S. in just a few years in terms of dominance on the world stage. (If it hasn’t already.)

It was certainly easy to see how that might be the case after touring one modern city after another where the wealth, commerce, growth and humanity on display was dazzling.

Still, despite all the eye-opening explorations of the province’s large cities and major tourism sites—or perhaps because of them—the most refreshing moments and the ones that consistently fuel my wanderlust, were those that were the most simple.

The moments included learning to cook a distinctly local fried rice recipe with a renowned chef at one of the restaurants we dined at. I also found pure joy in simply standing on a street corner one afternoon as a local elementary school let out, watching the masses of grandparents arriving on motor scooters and bicycles to pick up their grandchildren.

It was a heartwarmingly human scene.

In China, grandparents play a much larger role in child rearing, which is why it was grandma or grandpa coming to collect the young children at school. As the children were being bundled onto the bikes and motor scooters, many looked at the American tourists standing nearby observing this process. There was a momentary look of shock in their eyes and then sheer wonder and curiosity. Some of the bolder children used the opportunity to practice their English, waving and offering shy hellos as grandmothers looked on proudly.

In moments such as these, the human connection and the sharing of goodwill transcended any tourist attraction on our itinerary.

It also reinforced my belief that these are the types of moments and interactions that make travel so vital for the future of our planet.

Still, for Jiangsu, the dilemma that remains is how to be recognized as a destination in its own right. And at least for Americans who come such a long distance to visit China and often have a limited amount of time, the question is: Can one come here and bypass the iconic tourist stops in Beijing?

What’s often buried in Jiangsu’s story of forward progress and modernity is its ancient offerings and history. Jiangsu is the starting point of the Silk Road, I was told by Lingbo, the tourism director from the Jiangsu Provincial Tourism Administration.

In addition, Nanjing was the capital of China for a very long time. The city’s name indicates as much: ‘Jing,’ means capital in Chinese. Only two cities in the entire country use jing in their name: Beijing and Nanjing.

What’s more, the Grand Canal that runs through Jiangsu province is as important in Chinese history as the Great Wall, according to Lingbo. It is another UNESCO World Heritage Site and the longest canal or artificial river in the world.

So can one visit China and skip the Great Wall?

The answer for Jiangsu perhaps is to offer itself up to tourists as a three or four-day extension of the popular pilgrimage many make to the country’s most famous and well-known sites.

Or perhaps it depends on what you come looking for.

If you’re seeking a glimpse of the real China, to get off the beaten track and dig a little deeper, observing how people live, work, worship and play, then Jiangsu offers all of that and more.

Previous UNWTO Tourism Highlights for 2017
Next EMEA, US and Central/South America hotel pipeline for September 2017