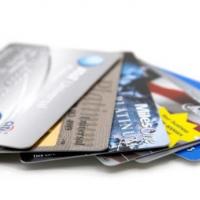 Here are the average annual expenses for each household*:

In all nine categories, a minority of respondents would be willing to cut their spending by 50% in order to save money. Debtors are only slightly more likely to cut back than non-debtors:

Nearly 1 in 5 (18%) Americans with credit card debt are unwilling to cut back in any of these discretionary spending categories.

“The average U.S. household spends thousands of dollars a year on non-essentials. If you’re charging these luxuries and carrying a balance, you’re spending an average of about 18% more for the privilege,” said Ted Rossman, industry analyst at CreditCards.com. “Would you have chosen the same car, plane ticket or restaurant if the price were 18% higher?”

According to the American Bankers Association, about 60% of credit cardholders carry balances from month to month. The Federal Reserve says the average household with credit card debt owes $5,700.

“For those in debt, I recommend balance transfer credit cards and looking for ways to boost your income and cut your expenses,” Rossman adds. “It’s not necessarily about going without – it’s about being an educated consumer and spending less on things you’ll still enjoy. Cutting a monthly expense is especially valuable because it comes up again and again.”