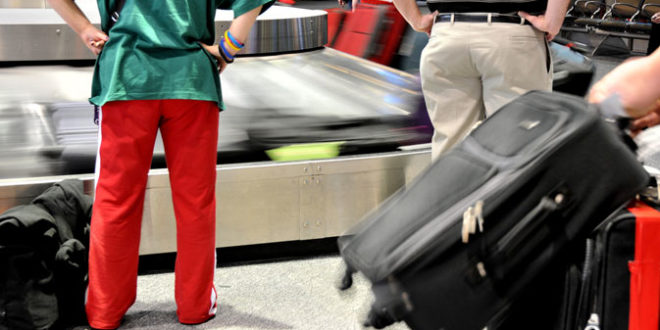 As each suitcase climbs up the conveyor belt into the plane, a small computer verifies that it actually belongs on that flight. If one bag didn’t, a red light would flash and the belt would stop until somebody acknowledges the mistake and reroutes the luggage.

This is the future of baggage handling. Delta Air Lines is investing $50 million to soothe one of air travel’s biggest headaches: lost and delayed luggage.

Delta carried nearly 120 million checked suitcases last year, collecting $25 in fees, each way, for most domestic bags. For that price, fliers expect their suitcase to be waiting on the carousel when they arrive. Delta already has one of the airline industry’s best luggage handling records — just 1 out of every 500 bags failed to arrive on time — but hopes that by deploying a RFID, or radio-frequency identification, tracking system globally it can improve further.

If the system works, other airlines are likely to follow. Ultimately the bag tag might be replaced with permanent RFID readers in our suitcases, reducing the chances fliers in the future will start a vacation missing their swimsuit.

“It’s a very smart move,” says Henry Harteveldt, founder of travel consultancy Atmosphere Research Group. “It’s one that will help increase customer confidence that their bags will arrive with them.”

RFID wirelessly identifies tags attached to items. The technology is widely used at warehouses to track goods but Delta’s rollout is the first global use for passenger bags.

To better understand the technology, think about your local supermarket. If every grocery item had an RFID tag, cashiers wouldn’t have to scan each product at checkout. Instead, the groceries would pass by a scanner and be instantly registered. Shoppers could even leave everything in their cart, having it all tallied at once.

Most airlines today use barcodes on tags to identify each suitcase — each tag has its own unique 10-digit number — and make sure it is loaded onto the right plane. But reading each barcode with a handheld scanner is time consuming. Often, a bag or two aren’t scanned or error messages are missed by workers focused on getting planes out on time.

Delta designed its system to stop those errors. At the airline’s 84 largest airports — accounting for 85 per cent of its passengers — Delta will have 1,500 special belt loaders with RFID readers built in. Those loaders — like the one DaRosa was using — stop when a bag for a different flight is accidently placed on the belt.

“It’s amazing technology,” says DaRosa, a ramp supervisor who has been testing the technology at Baltimore Washington International Airport. “It’s going to totally eliminate a bunch of careless little errors.”

Replacing handheld scanners allows ramp workers to use both hands to lift bags, reducing injuries and speeding up the loading and unloading process. RFID also shortens the time needed to find and remove a bag from a plane at the last second. All of that means more on-time flights.

Delta is also using RFID to track bags through the labyrinth of conveyor belts below terminals. If bags fall off a belt at a particular curve or get suck at a junction, Delta will now have enough RFID readers — about 5,200 globally — to pinpoint the trouble spot and fix it. The Atlanta-based airline says it plans to have the system online in 344 airports by the end of August.

The new tags look like traditional ones. But if held up to the light, passengers can see a fingernail-size chip and a credit card size antenna inlayed inside.

By the end of this year, fliers will be able to track their bags through the Delta smartphone app, getting push notifications at each step of the journey. If a bag misses its flight, passengers are also notified instantly.

That way passengers “aren’t standing at a baggage carousel waiting for the last piece of luggage to come off to realize their bag isn’t there,” says Sandy Gordon, Delta’s vice-president of airport operations for the eastern U.S.

Most passengers’ bags do arrive on time. But there are so hiccups, with 1 out of every 500 bags Delta carried last year failing to do so. It’s a record surpassed by only Virgin America and JetBlue Airways, which both have smaller and simpler route networks. Twice as many were delayed last year on American Airlines, according to statistics reported to the Department of Transportation.

Of the 245,000 bags Delta mishandled last year, 208,000 of them arrived within three hours, according to the airline. Another 25,000 were reunited with passengers within 12 hours. The remaining 12,000 were either lost or took more than 12 hours to be delivered.

Installing RFID isn’t going to solve all of Delta’s baggage problems. But the airline estimates a 10-per cent reduction in delayed bags. That means about 25,000 fewer bags the airline has to deliver to passengers’ homes, offices or hotel rooms.

For the past five years, Australian airline Qantas has offered a permanent RFID bag tag that fliers can purchase for about $23 and use when flying the airline domestically. Several big airports, including those in Las Vegas, Hong Kong, Milan and Tokyo, use RFID to track bags through parts of their systems.

But Delta, the world’s second largest carrier by passenger traffic, is providing the most-comprehensive tracking the industry has seen to date.

Airlines have long found RFID too pricey but the cost has dropped. McCarran International Airport in Las Vegas says it currently pays 12 cents for each RFID tag, down from 21.5 cents a decade ago. Traditional tags cost the airport 3 cents.Delta refused to say how much it’s paying for RFID bag tags, except that it is less than 10 cents each.

And nothing is preventing the airline from losing your bag if any of these tags get ripped off along the way.