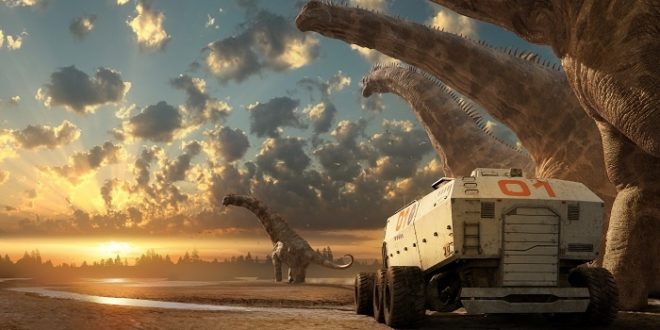 Dinosaurs in the Wild extends London run to July

Due to demand, the producers of Dinosaurs in the Wild have announced new dates and time slots for London as the time travel adventure extends its stay in the capital to July.

After successful runs at Birmingham’s NEC and Manchester’s EventCity in 2017, the multimillion-pound hit show’s unique time machine is now set for a longer residency on London’s Greenwich Peninsula, meaning more families will now have the chance to be taken back an astonishing 67 million years to encounter amazing creatures like Tyrannosaurus, Alamosaurus and Dakotaraptor roaming the wild.

Londoners will be immersed in an unforgettable experience that, for the very first time, will make them feel as though they are actually there – among the dinosaurs, in their world, at their time.

Dinosaur tourists are whisked by time machine to join scientists at an extraordinary research station – TimeBase 67 – which has been built on the Late Cretaceous plains 67 million years ago.

On the ultimate voyage of discovery, they drive with their guides through lumbering herds of dangerous dinosaurs, watch a dinosaur autopsy, witness hatchlings emerging from eggs, plunge their hands into dinosaur poo, and visit a lookout, with panoramic views of the teeming prehistoric life in every direction.

Producer Jill Bryant commented: “After our successful runs in Birmingham and now in Manchester, we’re delighted to say that we’re extending our stay in London until July 2018.

“We can’t wait for even more visitors to be thrilled by this completely new kind of immersive experience.

“We’re in no doubt that Londoners will be astonished when they come face to face with the dinosaurs as they travel back in time.”

Dinosaurs in the Wild opens its doors in London on Monday February 12th, on Greenwich Peninsula, just a few minutes from North Greenwich Underground station.

The new dates and time slots extend its stay in the capital to July 31st.