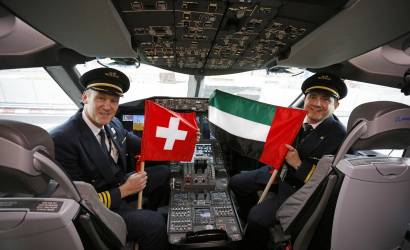 Etihad Airways launched its flagship Boeing 787 Dreamliner on the Abu Dhabi–Geneva route earlier, as the launch of the summer schedule.

Geneva is the second Swiss destination after Zurich served by Etihad Airways’ next generation aircraft which is fast becoming the backbone of the Abu Dhabi-based carrier’s long-haul fleet.

Peter Baumgartner, Etihad Airways chief executive, said: “We are delighted that Switzerland, one of our most attractive markets for both business and leisure travellers, will now be exclusively served by our flagship Boeing 787 Dreamliner.

“In addition to maintaining attractive timings for guests travelling between Abu Dhabi and Geneva, we will create further suitable connections in many markets that will benefit more travellers to conveniently connect to Geneva via our Abu Dhabi hub.

“Through our optimised schedule, more business and leisure guests from an increasing number of destinations will now have the opportunity to experience our next generation aircraft throughout their journey with us.”

The new generation aircraft’s environmental performance brings a number of operational advantages, such as a 12 per cent reduction in fuel consumption compared to the previous aircraft on the route and a concomitant substantial reduction in carbon dioxide emissions.

Another advantage of the Dreamliner’s new technology are the noise emissions that now lie significantly below the permissible limits.

Introduction of the 787 Dreamliner will also see a scheduling change that will optimise timing for guests travelling to and from Geneva.

Etihad Airways will maintain an early morning arrival into Geneva and operate a revised mid-morning return service that will improve connectivity to a wider network of destinations across Asia and Australia, including Hong Kong, Kuala Lumpur, Melbourne, Perth, Singapore, Sydney and Tokyo.