Breaking News
Home / World Tourism / Flying soon? This is how much travelers spend on in-flight drinks 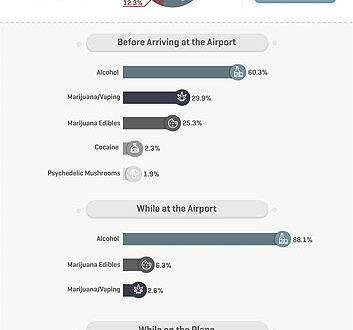 Flying soon? This is how much travelers spend on in-flight drinks

Blame pre-flight nerves or early vacation enthusiasm, but air travel and alcohol are closely associated. Bars are familiar airport fixtures, and flight attendants ensure access to booze continues after takeoff. There’s even the widely held notion that alcohol has an increased effect at higher altitudes – a belief without much scientific support but plenty of placebo potential.

Of course, alcohol isn’t the only substance flyers consume – people often use sleeping pills to doze on long flights or anti-anxiety medications to quell phobias related to flying. Then there’s the issue of smuggling illicit drugs through the air, an ever-evolving battle between authorities and traffickers (“cocaine pants” are apparently an ineffective tactic). Delphi Behavioral Health Group wondered about people’s real experiences with consuming and concealing substances on flights. So they surveyed more than 1,000 people on the subject.

Delphi Behavioral Health Group’s findings reveal how intoxicated most passengers get when they travel by plane and how bold those who sneak substances can be. Moreover, our data show that getting wasted can get pretty ugly thousands of feet above sea level.

Some of the findings include: