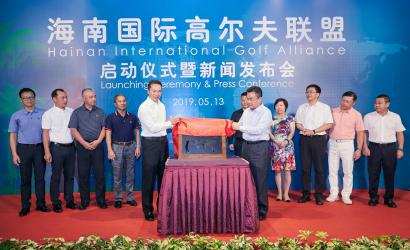 The Hainan International Golf Alliance has been established in Haikou to bring together government and golf tourism stakeholders from across Hainan province.

The body will seek to promote the tropical Chinese island as a golf tourism destination.

They were joined by representatives from Boao Forum Golf Club, the Dunes at Shenzhou Peninsula and Sanya Luhuitou Golf Club, who will also make up the alliance.

Hainan is the first province in China to form such an alliance and promote golf as a vehicle for international tourism in this way.

“The establishment of the alliance reflects the integration and upgrading of the province’s tourism, culture and sports industries.”

The alliance will focus on major consumer markets in Japan, South Korea, Australia and south-east Asia, plus other countries that have direct flights to Hainan, visa-free entry policies (currently 59 in total) and an enthusiasm for golf.

Tenniel Chu, whose Mission Hills Group also operates 12 courses in Shenzhen, making it a world-record 22 courses in total, added: “The Hainan International Golf Alliance is prepared to unite all members to extensively expand contacts with similar organisations in other countries across the region and worldwide.

“We will continue to build the reputation of golf in Hainan and its appeal to overseas markets through tournaments, forums, exhibitions and awards.”

Chu – who was recognised with the title of Travel Personality of the Year at the World Golf Awards in 2018 –  continued: “Looking ahead, the alliance will admit airlines, charter operators, travel agencies, hotels and other travel-related companies, as well as more high-quality golf clubs in Hainan.