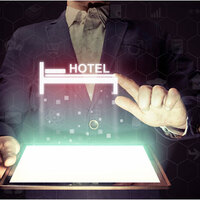 HotelHub, the leading hotel technology solution provider for TMCs and their corporate customers has revealed that global transactions continued to climb in the final quarter of 2021, giving cause for optimism that bookings made via the platform will reach pre-pandemic levels before the end of this year.

According to the latest HotelHub Index, total hotel transactions globally in December 2021 had reached 61 per cent of volumes for the same month in 2019 and more than double for December in 2020. This figure compares with volumes of just 21 per cent of pre-pandemic levels in January 2021 and 31 per cent by mid-2021. The upwards trajectory began in August and continued to rise by around five to ten per cent month on month over the second half of the year.

US hotel bookings via the HotelHub platform are showing particularly strong recovery, reaching 91 per cent of pre-pandemic volumes in December 2021, compared with the same month in 2019. This amount contrasts with the start of 2021 when volumes in January were only 22 per cent of 2019 transactions in the US.

European hotel transactions continued to rise in the final quarter of 2021, but still have a way to go to reach 2019 levels. December 2021 saw Europe volumes reach 53 per cent of pre-pandemic volumes for the same month in 2019.

HotelHub saw no major increase in the number of cancelled hotel bookings in December 2021 despite the new Covid variant. Some 23 per cent of transactions were cancelled that month, compared with a monthly average of 18 per cent for the rest of the year. This figure compares with an average monthly cancellation rate of 16 per cent pre pandemic in 2019.

The majority of all HotelHub transactions globally continue to be domestic hotel bookings. In December 2021, only 15 per cent of hotel transactions were for international travel compared with 38 per cent pre-pandemic in December 2019.

Other notable trends observed by the HotelHub Index are:

“With some of the leading global TMCs as clients booking over 75,000 room-nights on a daily basis, HotelHub is ideally placed to identify key trends in the hotel sector. The data from our latest HotelHub Index shows encouraging signs that recovery in the hotel sector is well underway and that corporate hotel bookings made via the HotelHub platform are returning to pre-pandemic levels faster than we expected,” said Eric Meierhans, Chief Commercial Officer, HotelHub.

“Not surprisingly the bulk of transactions during 2021 were domestic hotel bookings, but we are now beginning to see a gradual increase in international transactions. Interestingly the number of cancellations in December were not that much higher than normal, despite the uncertainty of the Omicron variant. In most cities, our data also shows that hotels are still looking to stimulate demand by offering keenly priced rates,” said Meierhans.