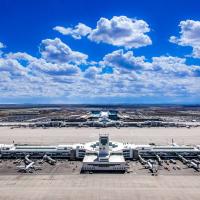 According to October report of the Airlines Financial Monitor, global airline share prices fell by 10.1% in October – the biggest monthly decline since June 2016.