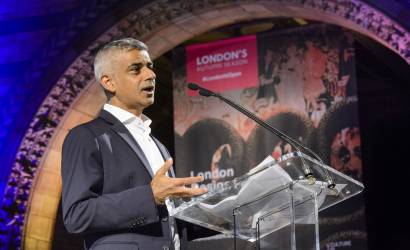 London mayor Sadiq Kahn has launched a new vision to accelerate the capital’s status as a world-class tourist destination.

Tourism numbers in London are set to rise sharply, with more than 40 million people expected to visit the city annually by 2025, an increase of 30 per cent on the 31.2 million visitors who came to the capital in 2016.

The Tourism Vision for London, which is backed by more than 100 industry partners and supported by the mayor, also projects visitor spending to grow by almost 50 per cent to £22 billion a year, up from £14.9 billion last year.

The surge in visitor numbers could be bolstered in the short-term by currency fluctuations, and according to separate research from London & Partners around two thirds of international visitors say they’re more likely to visit London given more favourable currency rates.

At the same time, London’s tourism industry is revealed to be worth 11.6 per cent of the capital’s GDP and nine per cent across the UK as a whole.

However, the tourism vision states that the growth in visitor numbers is not a given with increasing competition from other destinations, particularly emerging markets that are fighting to attract new visitors.

In response, it makes four recommendations:

London and Partners’ findings coincide with data from Google that reveals the capital is the most searched for global destination for city and short breaks.

According to Google, London leads worldwide searches for city and short breaks ahead of Barcelona, Rome, Paris and Amsterdam, with the overall number of searches up by 17 per cent on year-on-year.

The Tourism Vision for London and this year’s autumn season were launched last night by the mayor of London, Sadiq Khan, at an event at the Natural History Museum.

Kahn commented: “London is the world’s greatest city, so it comes as no surprise that we lead the way when it comes to international tourism.

“Visitors to the capital bring huge benefits – the industry boosts London’s economy, as well as supporting hundreds of thousands of jobs and showing the world that London is an open, welcoming and diverse city.

“It’s important that all Londoners benefit from a growth in tourism.

“By inspiring visitors to come to our great city during quieter periods like autumn and to find hidden gems off the beaten track, we can ensure that the projected growth in visitor numbers is sustainable and that the tourism and cultural industries work for everyone.

“London’s Autumn Season will show visitors what it is like to explore the city like a Londoner, whether that’s finding the capital’s secret treasures or visiting its world-leading exhibitions and shows. More than ever it is vital to ensure that the capital extends a warm welcome to all guests of our incredible city.”