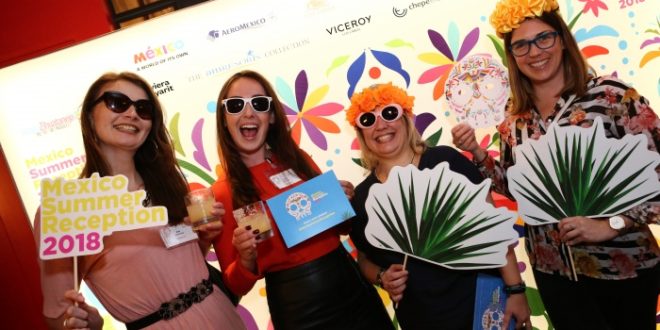 The first Mexico Summer Reception has come to a close after holding events in Edinburgh, Manchester and London in a highly successful and busy week for the Mexico Tourism Board.

The Mexico Summer Reception saw a week of celebrations as Mexico tourism continues to thrive, as evidenced by Mexico’s increase in rank to sixth most visited country in the world, with 39.3 million international visitors in 2017.

Air connectivity to the country has also increased with the addition of more than 1.5 million new seats scheduled on direct flights to Mexico including a 107 per cent increase for Eurowings alone.

The events were hosted in three of the UK’s biggest cities and offered resorts, airlines and suppliers the opportunity to meet potential UK travel industry contacts in a warm and animated atmosphere, in some of the cities’ most stylish buildings.

Guests enjoyed a spread of delicious food along with traditional Mexican drinks such as Margaritas and Tequila.

For this roadshow closure in London, the United Kingdom’s Mexican ambassador Julián Ventura gave an insightful speech on what makes his country of birth so special.

Vicente Salas Hesselbach, director at the Mexico Tourism Board, said: “The first ever Mexico Summer Reception has been a tremendous success.

“We’ve loved bringing some of the UK’s biggest cities closer to what the great country of Mexico has to offer on a tourism front.

“The relaxed feel around the week’s events has allowed guests and suppliers alike to enjoy themselves while making worthwhile contacts in the process.”

Take a look here for a series of shots from the London event.