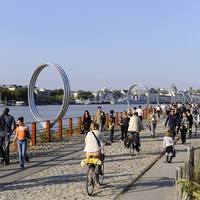 Most welcoming cities and the effects of over-tourism

AMSTERDAM, NL – Online travel specialists TravelBird have released a study ranking international cities according to how welcome they are in relation to their levels of over-tourism. Reports this summer have shown how over-tourism is dampening the spirits of local communities and affecting visitor experiences. As a travel provider, TravelBird feel they have a duty to promote thoughtful travel and sustainable tourism. They undertook this study firstly to take notice of those cities that are making impressive efforts to welcome tourists responsibly, and secondly to open the dialogue about over-tourism and its impact on residents and their surrounding communities.

To create the ranking, TravelBird first analysed the global top 500 tourist destinations (taken from the UN-WTO) based on factors that can make a visitor feel welcome, such as a welcoming port of entry (airport, train station etc.), citizens’ happiness, safety, openness to host tourists, and English language proficiency. Furthermore, they ran an expert poll asking over 15,000 travel journalists how welcoming they found each city based on their personal experiences. TravelBird then weighted all of these factors with a formula that measures over-tourism in each destination to determine the final ranking of 100 cities. This research highlights a precise selection of popular cities around the world in order to give an international overview, meaning there are undoubtedly many welcoming cities not included in this study.

When a city reaches its capacity for the number of tourists it can carry, issues such as overcrowding, lengthy queues at attractions, and increased living costs start to occur. This can negatively affect the daily lives of local residents and therefore impact how welcoming the city is to tourists. To determine a quantifiable figure for an issue as complex as over-tourism, TravelBird specifically looked into the tourism carrying capacity of each city. This was calculated by comparing the following factors: number of residents compared to the number of tourists during the peak season, which indicates levels of overcrowding. Next they looked at number of licensed hotel beds in addition to the number of peer-to-peer rental beds (per sq km), which indicates if the city has adequate tourist accommodation. Following this, they conducted a second representative poll which asked local residents how tourism has positively or negatively impacted their daily lives, and used this data to create a weighted average that contributed to the city’s total over-tourism score.

“As a stakeholder in the future of travel, TravelBird has a responsibility to confront the growing problem of over-tourism,” says TravelBird CEO Steven Klooster. “We undertook this study as the first step towards a more sustainable future. It’s a call-to-action to ourselves and to fellow tour operators, to residents and local governments in those places that are worst affected by over-tourism, to work together to find solutions to this problem. We believe tourism can have a positive impact on local destinations; with a clear understanding of the issues at hand, innovative thinking and commonsense legislation, we can preserve and protect them for the future.”

The table below reveals the top 20 most welcoming cities in this index. Each category is scored from 1 – 10, and the higher the score, the better the city ranks for that factor:

Further findings from this study: