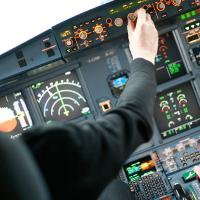 If you asked any European pilot if there is currently a pilot shortage, most of them would probably laugh. Few pilots in Europe would be willing to agree with media headlines about the ‘looming pilot shortage’. Then how come we are always hearing about the hundreds of thousands of pilots that are needed over the next decades? Why has the ‘pilot shortage looming on the horizon’ for so many years, never materialised?

The answer is simple and staring us in the face: There is no pilot shortage.

As outlined in a recent ECA Discussion Paper, to date in Europe, there is no evidence for a deficit in pilot numbers. ECA estimates that in various European Member States there is a large pool of pilots – or rather licence holders – who are either unemployed or unable to find a flying job that provides a reasonable lifestyle. Figures from our national pilot associations indicate an average 15% unemployment rate among pilots in Europe (source: becomingapilot.eu). The lack of data from national Civil Aviation Authorities, EASA and Member States makes it difficult to keep track of the total number of European licence holders vs actively flying pilots.

There are large numbers of available licenced pilots who are deterred from filling available positions, and they are ready to be recruited by any operator wishing to actively do so – under the right conditions.

The ‘pilot shortage’ debate is an oversimplified way to brand the ‘coverup’ of many structural problems in the industry. What may be perceived – or portrayed – by some of the industry as a ‘pilot shortage’ is in fact part of a complex discussion on accessing pilot supply, including by weakening regulation to unlock pilot supply for certain airlines at lower cost, and more profitable for some training organisations.

The terms ‘pilot shortage’ and ‘pilot supply’ are often used as a euphemism – a wrapper for a package of wishes to weaken regulation on licensing, training and workload. All this in order to make the access and use of the pilot supply cheaper for airlines, at the further expense of professional standards.

Where in the past airlines selected candidates for aptitude and then financed or co-financed the ab-initio training to provide themselves with highly qualified and motivated people – today’s aspirant airline pilots mostly self-finance their training. Initial aptitude testing is very often left to the training organisations.

Here a business case issue arises: many pilot training organisations have a vested interest in allowing young aspiring pilots to enroll on their training courses. Whether the candidate has got the necessary skills for becoming a pilot is often not high on their list of concerns. What some training organisations are interested in is simply training as many pilots as possible. Did you know that every pilot trained generates between 100.000 and 120.000 euros gross for the country’s economy? Thanks to their attractive marketing pitch – selling the childhood dream of flying and ‘glamorous lifestyle’ once associated with the pilot job – it is not surprising that training schools churn out pilots at an unprecedented rate.

But this also means that in practice today the main entry requirement is the ability of the candidate to pay the (high) cost of the training school (approx. 100.000 euros), and not the right skills, attitude, and profile.

The full capacity of training organisations to train licenced pilots exceeds by far any foreseeable need by operators in the industry.

The fact that many aspiring pilots do not pass the selection of traditional operators and are then forced to self-finance an additional type rating (or even give up their aim of becoming a professional pilot) is an indication that the current approach of the industry to pilot training and hiring is flawed. To prevent this, the operators should be much more involved (as historically) at the initial stages of entry into the profession by actively selecting the right candidates BEFORE the training commences.

Another direct consequence of this flawed approach is the industry already noticing that they do not attract anymore the right talent for the profession. Beyond the typical male, middle-class candidate, able to finance the training, very few people from other social or ethnic backgrounds enter the profession. Less than 5% of Europe’s pilots are female, which also serves to illustrates that the issue of making the ‘cockpit profession’ more attractive for women has yet to be addressed properly.

If aviation wants to attract talented people with the right profiles it needs to tap into a different pool of candidates. This also means opening new possibilities for relieving the financial burden of the training by either sponsoring, co-financing or assisting in favourable loan conditions and providing bank guarantees to the aspiring pilots.

Paying the training costs of new desired pilots and a modest wage when in training – as for example demonstrated by Air France – would undoubtedly provide as many new, highly skilled pilots as an air operator could ever need.

Pilots are still trained to proficiency to perform a predetermined program. While this may not help to make pilot training an exciting avenue for youngsters, it also does not prepare the trainees for the many challenges in an operational airline environment.

Pilot training must move to a competency-based concept where the skills – whether manual, intellectual or managerial – are sharpened and perfected to enable the candidate to adapt quickly and comfortably to the operational environment. For this, basic flying skills and understanding of the physical environment of flying must be at the core of the training concept, to provide real-life exposure that even the best simulators cannot replicate. In addition, it must provide the prospective airline pilot with a real “education” that encompasses management, economic, leadership and people skills – well beyond what is taught today in an ATP syllabus, both from an academic and practical hands-on view.

These syllabi must be taught using modern teaching techniques that appeal to a new generation of candidates and keep the airline pilot training both challenging and exciting.

It must be also noted that many of the changes that have been made to pilot training, over recent years, have been at the initiative of both air operators and training organisations primarily to reduce both time and cost for them, not to improve quality. This trend must stop, and any alleged ‘pilot shortage’ claims must not be used to further weaken European safety regulations on pilot training, flight time limitations for instructors or examiners, or other relevant legislation.

The pilot training syllabus must be brought into the 21st century, by moving it to a competency-based concept, by putting basic flying skills (back) to the centre and providing pilots with a real ‘education’ that encompasses management, economic, leadership and people skills.

Any alleged ‘pilot shortage’ claims must not be used to weaken European regulations on pilot training, flight time limitations for instructors or examiners, or other relevant safety legislation.

The pilot career has lost its shine – Atypical employment as entry barrier
The former luster of the pilot profession is no longer enough to compete with the many new, alternative and attractive digital & new technology related jobs, more appealing to the millennial generation. But restoring the “glamorous pilot job image” might actually not be necessary. What could attract and motivate young people to the profession is the security of the career and attractive employment conditions.

Currently, atypical employment is on the rise in European aviation. Many legacy airlines have not hired for years. Certain low-cost airlines have championed the model of ‘contractor’ and ‘self-employed’ pilots – often working on zero-hours contracts – fed by the large number of unemployed licence holders with few flight hours in their log books.

Making terms and conditions competitive enough – and offering direct open-ended employment contracts governed by local law where crews are based (instead of precarious atypical forms of employment, based on the laws of a foreign country) – would also contribute to attracting back the thousands of European licence holders who have sought better conditions abroad in Asia or in the Gulf States.

To attract female pilots, airline managers need to think about significantly improving the availability of predictable, family friendly, flexible and part time working (rostering) patterns. This could help prevent the approximately 10% of female pilots who join the profession from being unable to return to flying after starting a family, such that less than 5% of pilots are female in more senior positions. It is detrimental to this development that currently certain low-cost operators in Europe just stop employing female pilots as soon as they become pregnant.

Working conditions, burnout, and lack of family friendly or controllable working patterns mean that thousands of available pilots are lost either through attrition – in particular a deleterious effect on women in the profession – or are forced to seek better jobs in other sectors or outside Europe.

Offering direct open-ended employment contracts governed by the local law where crews are based – instead of precarious atypical forms of employment, based on the laws of a foreign country – would also do a lot to attract back the thousands of European licence holders.

The origins of the ‘pilot shortage’ myth
Some data sources allow for forecasting of pilot shortage in different regions of the world, with the lead of Asia. These are the outlooks published regularly by aircraft manufacturers. For example, the Boeing’s Pilot Outlook forecast advertises growing airline fleets and hence growing demand for pilots worldwide, which it justifies with the current and future aircraft orders (for retiring fleets and growing airlines and regions). “The Boeing Pilot Outlook predicts a need for 106,000 new pilots between 2017 and 2036 in Europe alone. Worldwide, the demand for new pilots will be an astounding 637,000 during the same period.” Source: Boeing

The 2nd source predicting a pilot shortage are the training organisations, such as CAE. “The worldwide commercial aviation industry will need an extra 255,000 pilots by 2027 to sustain its rapid growth and is not moving fast enough to fill the positions, according to a 10-year forecast published by training company CAE Inc”. Source: Reuters

While such data might be accurate from the training organisation’s commercial or company point of view, it does not address the issue of the presently ‘ready to fly’ pilots and how to ensure they fit in some of those new employment slots. Nor does it say how to select the right candidates and to train the crews to make sure they are ready to fly these soon to be delivered, modern, highly automated aircraft of the future. Manufactures, instead of only ‘making the optimistic forecasts’, should join the debate on the ‘pilot of the future’.