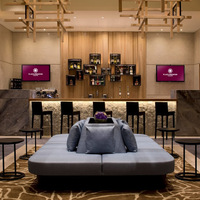 According to the Global Business Travel Association (GBTA) Foundation*, over one-third of business travellers (37%) have combined their work travel with an extended leisure break, resulting in what is now known as a ‘bleisure’ trip. For travellers looking for a spot of pampering prior to a bleisure trip or for those simply pushed for time amidst a jam-packed schedule, Airport Parking and Hotels (APH) has put together a guide comparing the wellness and beauty treatments available at 22 airports around the UK.

The research highlights the spa facilities and beauty treatments available at 22 airports in the UK, including East-Midlands Airport, London Heathrow and Manchester Airport.

Nine of the 22 airports offer stress-busting massages prior to departure, including at Cloud Spa branches at Birmingham and Manchester Airports, and at Be-Relax Spa at London Heathrow, which is located after security in Terminal 5B. The lowest priced massage available at each airport ranges from £1 per minute at Cloud Spa branches to £25 for a 15-minute massage at Plaza Premium lounges at Heathrow.

Travellers looking for a last-minute manicure will be pleased to learn that nine airports researched offer manicure and pedicure treatments, including AeroSpa branches at Liverpool John Lennon and Newcastle International, as well as Bliss Spa at Aspire at London Luton. Starting prices for manicures vary from £17 at AeroSpa branches to £40 for a file and polish at The Travel Spa at No1 Lounge at Heathrow Terminal 3 and to avoid additional waiting time at the airport, appointments at AeroSpa and Cloud Spa branches can be booked ahead online, prior to arriving at the airport.

Previous Glamping in Golden ❥ Camping but BETTER!
Next Banff to host AdventureELEVATE in 2018