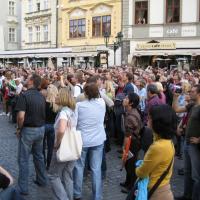 New research(1) from Sainsbury’s Bank Travel Insurance reveals the number of people planning city breaks this year, both here and abroad, is dramatically higher than in 2017.

In 2018 38 per cent of people plan to take a city break in the UK, compared to 29 per cent who said this 12 months ago when asked about their 2017 holiday plans. The corresponding figures for overseas city breaks are 28 per cent and 19 per cent respectively.

However, overall people are planning to take fewer overseas holidays this year than in 2017. Just over six out of ten (61 per cent) adults in the UK intend to take an overseas vacation in 2018, compared to 66 per cent who said this 12 months ago when asked about their holiday plans for 2017.

The corresponding figures for people’s intentions to take holidays in the UK are 63 per cent and 75 per cent respectively.

People are also looking to spend slightly less on their holidays. On average, they are looking at spending around £779 per person on their main holiday in 2018, and the corresponding figure 12 months ago was £816.(1)

In terms of booking their 2018 holidays, the research found that one in four (24 per cent) had already booked before the end of 2017, and a further 14 per cent intend to do this during January. Just six per cent intend to hold out for a last-minute deal.

When it comes to travel insurance, the findings reveal six per cent of holidaymakers won’t buy their cover until the last week before departure, and an alarming one in five (22 per cent) won’t buy any at all.

Sainsbury’s Bank points out that as well as covering people for mishaps or problems whilst on holiday, most policies offer some cancellation cover for emergencies from the date of purchase.

Karen Hogg of Sainsbury’s Bank Travel Insurance, commented: “We all love having something to look forward to, so we’d urge people to make sure they buy their travel insurance at the time of booking their holiday, to ensure their vacation is protected from the get-go.”

Overall, beach holidays are the most popular genre of overseas trip planned by 39 per cent followed by city breaks (28 per cent) and cruises (14 per cent).

For 2018 UK holidays, city breaks are the most popular type planned by 38 per cent of adults, followed by walking holidays (17 per cent), and spa/retreat vacations (16 per cent).

(1)Sainsbury’s Bank commissioned Opinium Research to survey 2,005 nationally representative UK adults aged 18+ between 8th to 11th December 2017. Opinium Research is a member of the British Polling Council and abides by its rules.