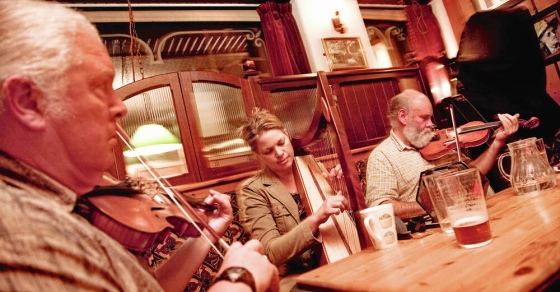 Until European travel becomes fully open to Americans, here’s a reminder of the fun that awaits us in Europe.

I once met an elfish, black-clad old man in the little town of Ventry, on Ireland’s Dingle Peninsula. When I asked if he was born here, he paused, breathed deeply, and said: “No, ’twas about five miles down the road.”

I asked him if he had lived here all his life.

When I told him where I was from, a faraway smile filled his eyes as he looked out to sea and muttered: “Aye, the shores of Americay.”

The Dingle Peninsula gives the traveller Ireland in the extreme. It feels so traditionally Irish because it’s part of a Gaeltacht, a region where the government subsidizes the survival of the Irish language and culture. While English is everywhere, the signs, songs, and chitchat are in Gaelic.

This sparse but lush peninsula marks the westernmost point in Ireland. Residents are fond of gazing out at the Atlantic and saying with a sigh: “Ahh, the next parish over is Boston.”

Fishing once dominated Dingle, but tourists and moviemakers are well onto the region now.

Several films feature the peninsula, including Ryan’s Daughter and Far and Away. Its offshore islands were the hideout of an aging Luke Skywalker in the most recent Star Wars trilogy.

What had been a trickle of visitors has surged into a flood as word of Dingle’s musical, historical, gastronomical and scenic charms spread.

About 50 kilometres around, the peninsula is just the right size for a day-long driving or cycling tour. Hopping on a bike, I assess the gathering storm clouds and zip up my parka. In Ireland, good and bad weather blow by in a steady meteorological parade. A little rain will just add to the experience.

Cycling these roads is like a trip through an open-air museum. The landscape is littered with a half-million sheep and dozens of monuments left behind by Bronze Age settlers, Dark Age monks, English landlords and now Hollywood directors.

In the darkest depths of the Dark Ages, when literate life almost died in Europe, peace-loving, scholarly monks fled the chaos of the Continent and its barbarian raids. Sailing to this drizzly fringe of the known world, they lived out their monastic lives in lonely stone igloo-like “beehive huts” that I pass on my ride.

I continue up the rugged one-lane road to the crest of the hill, then coast back into Dingle town — hungry, thirsty and ready for a pub crawl.

Of the peninsula’s 10,000 residents, 1,500 live in Dingle town. Its few streets, lined with ramshackle but gaily painted shops and pubs, run up from a rain-stung harbour. During the day, teenagers — already working on ruddy beer-glow cheeks — roll kegs up the streets and into the pubs in preparation for another tin-whistle music night.

In Dingle, there’s live music most nights in half a dozen pubs. There’s never a cover charge. Just buy a beer and make yourself at home.

The Small Bridge Bar and O’Flaherty’s are the most famous for their atmosphere and devotion to traditional Irish music. But tonight — and most nights — I make a point to wander the town and follow my ears.

Traditional music is alive and popular in Ireland. A “session” is when musical friends (and strangers who become friends) gather and jam.

I follow the music into a pub and order a pint. The music churns intensely, the group joyfully raising each other up one at a time with solos. Sipping from their mugs, they skillfully maintain a faint but steady buzz.

The drummer dodges the fiddler’s playful bow. The floor on the musicians’ platform is stomped paint-free and barmaids scurry through the commotion, gathering towers of empty, cream-crusted glasses. With knees up and heads down, the music goes round and round.

Making myself right at home, I “play the boot” (tap my foot) under the table in time with the music. When the chemistry is right, live music in a pub is one of the great Irish experiences.

The Irish like to say that in a pub, you’re a guest on your first night; after that, you’re a regular. That’s certainly true in Dingle, the next parish over from Boston.