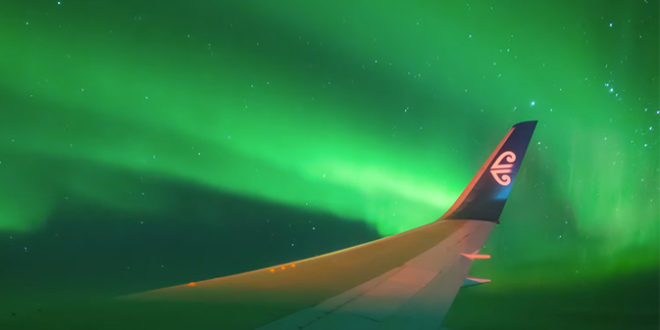 WELLINGTON, New Zealand — They took an eight-hour flight just to look out the airplane’s window, but it was an extraordinary view.

A charter plane that left Dunedin, New Zealand, late Thursday flew close to the Antarctic Circle to give the eager passengers an up-close look at the Aurora Australis, or Southern Lights.

Otago Museum Director Ian Griffin came up with the idea. An astronomer, Griffin said he was inspired after seeing the Southern Lights while flying as a guest on a NASA observatory plane.

He says the 134 seats on the chartered Boeing 767 sold out within five days and one man travelled from Spain for the trip. He says he could have filled the plane several times over, although they were only selling window seats and seats immediately adjacent, leaving the middle of the aircraft empty.

“I thought it was absolutely brilliant,” Griffin said. “We were right under it. There were beautiful streamers, auroral streamers. This green-colored stuff that moves quickly, it looks like you’re looking into a green, streaky river.”

Passenger Nick Wong said he’d stumbled upon the idea of the flight last year through social media and decided to sign up.

Huge congrats to @iangriffin & crew for making #flighttothelights a reality. @FlyAirNZ is this the most impressive wing shot ever? #Nextyear pic.twitter.com/ZZQdrBn0t8

“I didn’t think we would actually see such a spectacular display, even by the naked eye,” he said. “It was really great to be a part of an adventure with like-minded people who were equally or more excited at viewing this phenomena as I was.”

Wong, a cancer research scientist, said he loves going camping and looking at the stars, something he found more stunning in New Zealand after moving from Australia three years ago.

Wong said he didn’t have any spare leave and was back at work giving a presentation on Friday after a night without sleep. He said viewing the Northern Lights, or Aurora Borealis, remained on his bucket list.

The Northern Lights are more famous in part because the northern polar region has more inhabited land. But the Southern Lights put on a similar show.

Both are caused by particles from the sun interacting with the Earth’s magnetic field.

Ever wondered what an aurora australis looks like from 60 South from a Boeing 767? Wonder no more… #flighttothelights pic.twitter.com/d6BamHWgdi

Griffin said the plane travelled to more than 60 degrees latitude south and offered about five hours viewing time. He said he chose a day close to the equinox and when the moon phase would allow maximum darkness.

One seat cost $2,000 New Zealand dollars or double that for business class.

Griffin said he’s thinking about another trip next year. Because the Boeing 767 is being decommissioned and the trip proved so popular, he said he may seek a larger jet.

There’s no question that the process to achieve PCI DSS (Payment Card Industry Data Security Standard) compliance has been a complicated ordeal for many travel agencies.