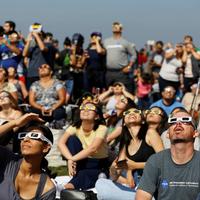 BROOMFIELD, COLORADO – Hotels in the Great American Eclipse path of totality reported a 244% increase in revenue per available room (RevPAR) on the night before the event, according to an analysis by STR’s Consulting and Analytics team.

In the three days leading up to the eclipse, hotels in the path of totality reported an 87% RevPAR increase.

“There was simply no modern comparison for this event, so while performance increases were expected, we weren’t sure to what extent hotels would capitalize on what ended up being a two-minute event,” said Carter Wilson, STR’s VP of consulting and analytics. “In the end, the cities with limited hotel supply, like Hopkinsville, Kentucky, for instance, showed the greatest gains, while major cities, like Nashville, were lower on the RevPAR increase list. On average across the path of totality, Sunday night occupancy increases were more pronounced than rate gains, and that was enough to lift performance results for the entire country last week.”

Other key findings of the analysis include:

Previous Hints of grandeur: Buenos Aires architecture a reminder of former wealth
Next The growth of exhibition industry accelerated in the fourth quarter of 2016