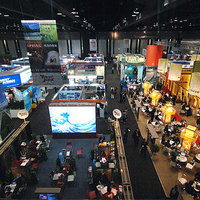 DALLAS – The Center for Exhibition Industry Research (CEIR) reports that growth of the exhibition industry during the second quarter of 2017 accelerated after a temporary setback in the fourth quarter of 2016. The performance of the industry, as measured by the CEIR Total Index, posted a robust year-over-year gain of 2.9% (see Figure 1), compared to a year-over-year increase of 2.2% for real GDP. The industry has finally outperformed the macroeconomy for the first time since the fourth quarter of 2016 (see Figure 2).

All exhibition metrics in the second quarter posted positive year-over-year gains (Figures 3 and 4). Real revenues (nominal revenues adjusted for inflation) posted the largest increase of 4.0% followed by attendees which rose 3.8%, whereas net square feet and exhibitors gained 2.1% and 1.8%, respectively.

“I look forward to the conversations taking place at the CEIR Predict Conference on 14-15 September and hearing from both CEIR’s economist and other economic experts on their predictions for the remaining months of 2017,” said CEIR CEO Cathy Breden, CMP, CAE. “There is a lot going on with a major hurricane in the oil refining stronghold of Houston and trade agreement negotiations.”