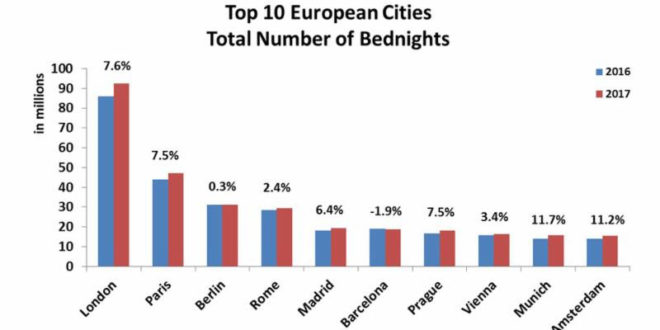 European Cities Marketing (ECM) announced a 7.7% growth in city tourism in 2017, with the domestic market increasing by 5.2% and the international market by 9.2%, respectively. The top 10 cities in terms of bednights stayed the same as the previous year, with London, Paris, and Berlin at the top of the list.

As for source markets Russia showed a tremendous increase of 27.3%, followed by China (17.3%) and USA (15.5%), while Italy (-3.4%) continued to decrease. Tourism development 2017 was driven by a positive economic development in overseas markets, the volatility in international airline connectivity (airberlin, NIKI, Monarch, Alitalia), and travelers getting used to the increasing threat of terrorism around the world leading to a strong recovery and decreasing sensitivity.

European Cities Marketing reported the preliminary results from the forthcoming European Cities Benchmarking Report with the findings that European cities continued their growth with a 7.7% increase in 2017 in total bednights compared to 2016. International bednights growth (9.2%) surpassed domestic bednights growth (5.2%) in 2017. The preliminary data feature results from 65 out of 121 cities, representing a total of 456.9 million bednights.

The top performing cities in terms of total number of bednights stayed equal compared to last year. Madrid took over Barcelona (which was heavily affected by the Catalan referendum) as the 5th city in the ranking, while the other cities remained in the same ranking positions as last year. London had the highest number of bednights in 2017 with a 7.6% increase, followed by Paris (+7.5%), Berlin (+0.3%), and Rome (+2.4%). Prague (+7.5%), Amsterdam (+11.2%), and Munich (+11.7%) had the highest growth rate among the top 10 cities. Besides Barcelona which was heavily affected by the Catalan referendum, Berlin’s impressive growth seen in previous years suddenly stopped, mainly driven by airberlin which filed for bankruptcy in 2017. 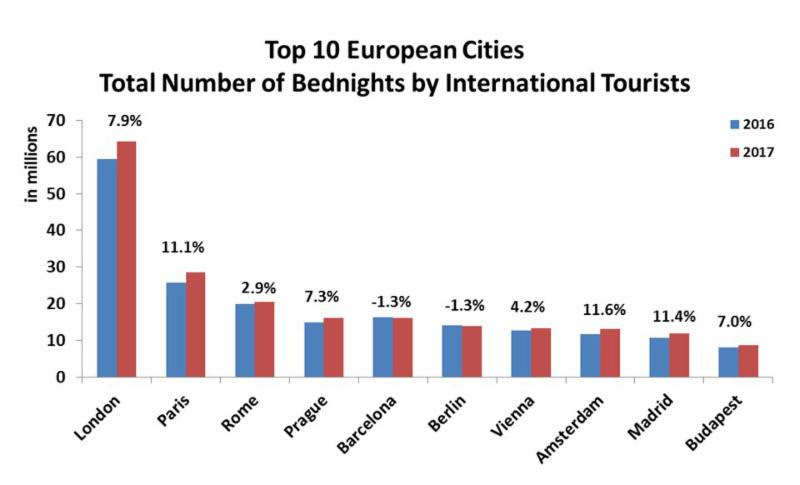 Successful recovery in European city tourism in 2017
“2017 was again an exceptional year for city tourism in Europe” confirms Dieter Hardt-Stremayr, ECM President. “After a rather difficult year 2016 marked by terrorist attacks and fears for further assaults in European cities, we are pleased to see the quick recovery when it comes to travelling to urban destinations in Europe. The strong positive development in bednights of crisis-shaken cities like Paris or London particularly confirm this hypothesis. This development shows the importance of travelling to cities which is not anymore only an option but rather a must in the yearly travel planning process for many tourists worldwide. In fact, when analyzing the travel behavior of the nine considered source markets, (except for Italy and Spain with a slight decrease) all other markets – especially the overseas markets – led to positive results in bednights and were driving growth. With Japan and Russia being strongly back on track, city tourism continues to prosper.”

Main Source Market Developments
Main source markets USA (12%), Germany (8%), and UK (7%) make up approximately 30% of the international source markets for European cities. Italy, Russia, and Japan as source markets were decreasing in terms of bednights since 2015. However, the Russian market recovered from last year’s decrease of 12.4% and had the highest increase with a growth rate of 27.3%. Italy continued its decrease by -3.4 %, however Japan turned around the decreasing streak into an increase of 6.2% in 2017. Besides Italy, the only other source market that showed a decrease was Spain (-0.4%).

ECM President, Dieter Hardt-Stremayr continues “We can see that European city tourism is still growing at an even faster pace than the years before. This development is particularly driven by positive economic developments in the BRIC (Brazil, Russia, India, China) markets showing high percentage increases, as well as a strong recovery of tourism demand in cities affected by terrorism in 2016. Even though European cities have also struggled of crises in 2017, it seems that travelers are getting used to the increasing threat of terrorism around the world leading to a strong recovery and decreasing sensitivity. Since the demand in 2016 shifted from capitals and premiere league cities towards smaller cities and developing cities, city tourism in Europe could showcase its diversity which resulted in ongoing growth for the hidden gems in 2017.”