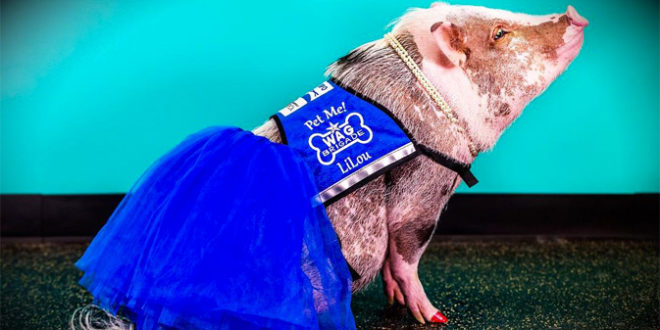 The Juliana-breed therapy pig is gaining worldwide fame for her outlandish outfits (think pink tutus and pilot hats) and brightly painted nails, and is winning hearts the world over for her calm and joyful demeanor. She is the newest member of the airport’s ‘Wag Brigade’, a team of dogs, cats and rabbits that has been trained to cheer grumpy airport visitors and calm nervous fliers prior to boarding.

LiLou is the first pig to join its ranks. According to USA Today, she can stand up on her back hooves, wave at people with her snout and play a toy piano. She turns two on Dec. 15.

When she’s not making people smile at the airport (she appears about once a week wearing a ‘Pet Me!’ badge, says SFist.com), LiLou spends her time making the rounds at San Francisco’s senior centres and hospitals.

Of, if you love animals like us, you can book the next flight out to San Francisco to see her in person.

Are the big players interested in buying smaller agencies? Well, it depends on who you ask.