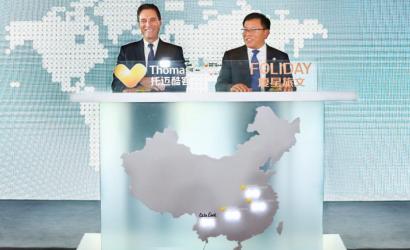 Thomas Cook China, the joint venture between Thomas Cook Group and Fosun, has announces plans for further growth in its own-brand hotel portfolio in the country with an additional two projects.

In a ceremony in Shanghai, Peter Fankhauser, Thomas Cook Group chief executive, and Jim Qian, Fosun Tourism executive director, signed memorandums of understanding for the development of a Casa Cook and a Thomas Cook Sunwing Family Resort in Fosun’s developments in Lijiang in southwestern China, and Taicang near Shanghai, respectively.

The hotels will be built by Fosun and managed by Thomas Cook China.

The two properties follow previously-announced projects with DreamEast Group, a leading tourist resort development company listed in Hong Kong, for two Thomas Cook Sunwing Family Resorts, one, in Jiashan near Shanghai and the other Hengyang, in southern China.

These new projects represent another milestone in the development of the company’s own-brand hotel offering in China to further differentiate Thomas Cook from local competitors.

Fankhauser said: “By partnering with Fosun to develop two flagship new hotels that will be managed through our joint venture, we’re making the most of our relationship to give Chinese customers a holiday experience that’s very different to what’s on offer from the competition.

“It’s especially pleasing to be realising our long-held ambition to work with Fosun to launch own-brand hotels, which form the core of our group strategy for profitable growth, here in China.”

Thomas Cook China was founded in 2016 and grew customers eight-fold in 2018.

Through partnerships and its own distribution channels, it is building the foundations to grow, over time, to become comparable in size to Thomas Cook’s other key source markets.

Both destinations are expected to open in late 2020.

Thomas Cook Sunwing Family Resorts is a brand within Thomas Cook Hotels and Resorts division which has a portfolio of 200 hotels under eight brands across Europe, Middle East and Asia, including the popular lifestyle brand Casa Cook and the innovative Cook’s Club.

The hotels will be operated under franchise from Thomas Cook Hotels and Resorts, adding further properties to its pipeline of hotel developments.

In summer 2019, Thomas Cook Hotels and Resorts will operate 200 hotels, with more than 40,000 rooms in 47 destinations around the world.

Qian added: “Today’s agreements with Thomas Cook China are another step forward in the development of our two key destination projects in Lijiang and Taicang.

“Building on the strengths of each other’s businesses, this strategic partnership further enhances Fosun Tourism’s proposition for the development of new tourism destinations, integrating two new hotel brands that fit perfectly within our existing portfolio.”