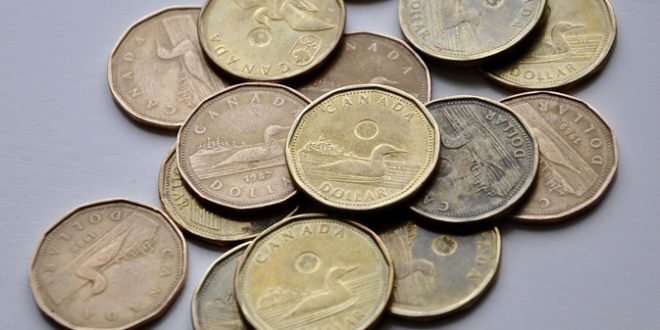 Time to book south of the border: Loonie hits 80 cents for first time in a year

TORONTO — The loonie broke above .80c US Monday for the first time in more than a year amid a weakened U.S. dollar and further signs of a strengthening Canadian economy.

After steadily rising for weeks, the Canadian dollar crested above the threshold in morning trading and was bobbing around that level about an hour before markets were to close at 4 p.m. ET.

The currency has gained nearly 10% since early May, fuelled by brightening economic prospects in recent months that prompted the Bank of Canada to raise its key benchmark interest rate earlier this month for the first time in close to seven years.

There are expectations one or possibly two more rate hikes could be in the offing before the end of the year.

Earlier Monday, Statistics Canada reported that wholesale sales hit a record high in May as they climbed 0.9% to $61.6 billion. Economists had expected an increase of 0.5 per cent, according to Thomson Reuters.

Isaac Holloway, an assistant professor at the Ivey Business School at Western University, said the gain in the Canadian dollar will have the biggest affect on importers and exporters, though it will likely be months before consumers see the fallout.

“Anyone importing or consuming imported goods could be seeing relief on the price front,” he said from London, Ont.

“On the flip side, anybody who is exporting is going to have to lower their prices to remain competitive with foreign competitors.”

A stronger loonie will also likely encourage more Canadians to travel south of the border, he added.

Shaun Osborne, chief currency strategist at Scotiabank, said he doesn’t expect the loonie to rise much more despite the strong economic performance as of late.

“A lot of good news is already priced in at this point,” he said.

“It’s difficult concocting what else will help it continue to rise. We’ll see a stabilization in the short run for the Canadian dollar.”

Osborne noted that there are a number of factors besides monetary policy that has helped the currency rise. The loonie has benefited from a lower U.S. dollar, which has been hit in recent months by political uncertainty under the Donald Trump administration.

But the greenback can strengthen if the U.S. Federal Reserve continues on its interest rate hike schedule this year.

Oil prices, which also heavily influence the Canadian dollar, have been stuck between US$40 and US$50 per barrel in recent weeks. Expectations are that crude prices will continue to stabilize, which would mean the Canadian dollar will not find additional support from the commodity.

“It’s going to be difficult for the Canadian dollar to advance at its current pace without more significant news and it’s difficult to see where that news is going to come from,” said Osborne.