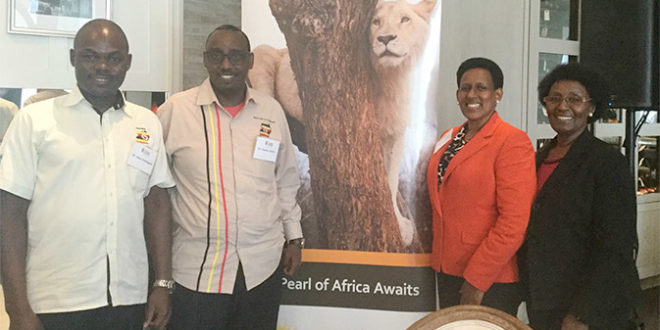 Uganda, ‘the Pearl of Africa’, comes to Canada

TORONTO — The smiling delegation of the Uganda Tourism Board extended a warm welcome at an industry breakfast yesterday in Toronto with a hearty “Jambo!”, the Swahili word for hello. Nicknamed the ‘pearl of Africa’ by former British Prime Minister Winston Churchill, the Uganda Tourism Board is hoping to encourage more Canadians to visit their part of East Africa.

“Our government is committed to tourism as one of their five primary growth potentials,” explained Margaret L. Kyogire, Deputy Head of Mission for The Republic of Uganda, who added that with a growing population of 40 million, tourism will be a benefit for increasing employment.

Stephen Aslimwe, CEO of the Uganda Tourism Board said Uganda may be small “but we have the highest concentration of wildlife on the African continent, more bird species than North America and the largest concentration of primates in Africa.” Located on the equator, weather year-round ranges from 18 to 29 Celsius.

Uganda also boasts a variety of landscapes and adventures from rock climbing and hiking in Mt. Elgon National Park to birding and game drives in the sprawling savannah, forests and wetlands of Queen Elizabeth National Park.

Well-known for its mountain gorilla population and myriad wildlife including the Big Five, Uganda offers memorable experiences such as seeing chimpanzees, tree-climbing lions, rhinoceros and Murchison National Park, which features Murchison Waterfalls, the source of the Nile River. Over 70 species of mammals can be found on this reserve, the country’s oldest conservation area. Uganda is also rich in African culture, with 50 ethnic groups, 40 kingdoms and over 60 languages spoken within its borders.

Canadians may not have direct air access to Uganda, but flights via Brussels Airlines and Ethiopian Airlines offer one easy connection for travellers. Other airlines that provide air access include Emirates, Etihad and South African Airways.

Visitors will also appreciate that with a smaller country comes more affordable prices, thanks to budget-friendly park permits to see the wildlife and fewer tourists than other safari hot spots. Tours are operated by a range of well-known names, such as Lion World Travel, Abercrombie & Kent (whose first tour originated in Uganda in the 1950s) and G Adventures, which offers a trip in partnership with the Jane Goodall Institute to protect wildlife and empower local communities.

Uganda’s capital of Kampala may not be the primary focus for leisure travellers, but after numerous safaris the city offers a change of pace with a wide range of accommodation and plenty of nightlife. See visituganda.com.