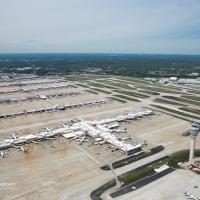 BOSTON – OAG, a global leader in flight information, has released its On-time Performance (OTP) Star Ratings, which accredits the top airlines and airports around the world for superior punctuality performance. United Airlines joined Delta Air Lines as a leading 4-star carrier, and Hawaiian Airlines (87.4 percent OTP) was once again the only North American airline to receive a 5-star performance rating.

OAG’s annual rating system is a global accreditation program that recognizes exceptional OTP across all airports and airlines regardless of size, geographic location or aviation peer group. The awards showcase the industry’s premier performers, with the top ten percent of airlines and airports receiving five stars. The awards are then distributed based on performance across all airlines and airports, with the poorest performers receiving one star. This year’s ratings are based on performance across the 12-months ending in May 2018.

“44 U.S. airports achieved a 4-star rating, which is quite impressive when compared to the performance of their global peers,” said John Grant, senior analyst with OAG. “On the airline side, carrier size is playing a major role in punctuality. Globally, only three low cost carriers earned five stars, compared to 12 legacy carriers. Hawaiian Airlines was the only North American airline in the top 12.”

The OTP Star Ratings are measured across a rolling 12-month period. To achieve an OTP star rating, the world’s airlines and airports must meet two simple criteria: all airlines and airports must have a minimum of 600 operations a month and OAG must receive flight status information for no less than 80 percent of scheduled flights within the 12-month period.

Previous WTTC praises resilience among Caribbean hospitality sector
Next When in Tokyo: Do This, Not That